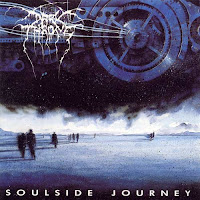 One of the coolest things about Darkthrone is that they're not just one legendary band...they are actually two legendary bands. One of those is the Helen of Troy of black metal music, a pioneering force which would launch the careers of several thousand impersonators, dancing about their newsprint-colored album covers with swords, candelabras and woodland shadows as company, all ghouled up with nowhere to turn except to your stereo and shriveled heart. The other is the band that started off a fairly dimwitted, primal death/doom metal entity and then crowned that phase off with this excellent death metal debut album (there was a second Darkthrone album to delve into this region stylistically, but it wouldn't be released for years, when vocals were finally added to the material; this is due in part to the band's shift in direction). One of these legends has vastly outnumbered and outpowered the other, and to be fair, Soulside Journey is not nearly as strong as most of the band's massive body of black metal material, but how many other bands have made the shift and not only survived, but prospered with it? I can think of some who went the other way around, but not many that would succeed at this.

But we're not here to talk about all that, we are here to discuss the culmination of Darkthrone's death metal career, the album recorded for 1990 but released a year later through Peaceville Records, who were developing quite a dark roster for the time (Paradise Lost, My Dying Bride, and so forth). This debut fits in only too well with those other acts, because for all its grinding, ebon impulse, there is still an edge of melancholic doom which pervades the material. If I had to compare this directly to another album, it would be Entombed's masterpiece Left Hand Path, but you can definitely hear a little Florida influence (old Death, i.e. good Death), a smidgeon of Lost Paradise, and of course a host of the band's early black/thrash influences like Hellhammer, Slayer, Possessed, and so forth.

Everything about this album simply oozes with cool, the kind of maturity I expect whenever I go into a death metal album today, even though this brand of very honest, primal brutality has been largely replaced by the interests of progression and technicality. Even the fucking cover art is amazing...who could ever forget the image of that vast machine with the shadowy figures beneath it, one of the greatest album images ever for this or any genre. These were also the days before Darkthrone got whittled down to a two piece, so Ted Skjellum (who would become Nocturno Culto) and Hank Amarillo (Fenriz in one of his early pranks) are joined here by Dag Nilsen (bass) and Ivar Enger (Zephyrous, guitar), and strangely enough, Soulside Journey could be accused of being their most 'professional' sounding record, with a solid production that could compete (and defeat) most other death metal in 1991.

A lot of these tracks are not new to the album, having appeared on one of the band's four demos, but in every case, with NO exceptions, these are the best versions by far, due to the superior, crushing sound. "Cromlech" mixes a little of the old school Paradise Lost gothic/death/doom atmosphere into a faster paced rhythm akin to old Entombed. "Sunrise Over Locus Mortis" creeps like a tarantella, then at 1:00 it builds into a riff not unlike something you'd hear on Death's Leprosy. "Soulside Journey" itself is another mid-paced, grooving death that also slows into a somber, doomed sequence, while "Accumulation of Generalization" begins with a popping bass curl repeated by the guitars into a crushing sequence of death and doom that far exceeds its prior incarnation on the Cromlech demo from a few years past. The vocal effects here are entirely freakish, and the riffs dynamite on plastic.

"Neptune Towers", which coincidentally would also become the name of Fenriz' fantastic dark ambient project in future years, is another glorious epoch of mesmerizing doom, laden in simplistic riffs that carry forth the oblique tide of the album, chords alternate with speed picked notes and an eventually incline into low, grooving mutes and more of the monolith sculpting dreariness. "Semipternal Sepulchrality" follows with some of the best use of chords and melodies, and one of the most classic riffs on the album at about :20 seconds in. This is a beautiful thing, a triumph of grim old death with a barely pronouncable title (the song titles were a lot smarter than some of the lyrics on this album). "Grave With a View" is more resonant doom, with nice choral synths layered into the opening chords, abandoning all hope as the listener begins to rot and roll in the sepulchre. "Iconoclasm Sweeps Cappadocia" features one of the better, fast rhythms of Soulside Journey, epic and sweeping melodic death that eventually breaks down into another moment of stunning, cryptic doom.

Crush not only our surrounding walls of curiosity,
but also the hordes of blind believers.

"Nor the Silent Whispers" has a lazy, rocking death rhythm to it which winds into the double bass rolling, and the 2nd, Death-like rhythm is decent, but this is not one of my favorites on the album. Nor is "The Watchtower", which has a few dull riffs in it that do not inspire nearly as much as the rest of the material here. The final track, "Eon" from the Thulcandra demo, is a solid execution of hope drowning, with another of those lazy beats, but this time it picks up into a decent gravestone flow with some quirky, eerie female choir synths for effect (I love it when old death bands would do stuff like this, access Morbid Angel's "Chapel of Ghouls" for perhaps the best example). And thus ends the 41+ minutes of the pivotal debut of Darkthrone, surely a trip into the soul searching, pseudo-intellect and imminent doom and despair implied by the cover image and the consistently evil sheen to the riffs.

Soulside Journey isn't perfect, there are a few songs I don't often feel compelled to visit and even beyond that, some of the riffs on other tracks do begin to feel repetitive, and not in the hypnotic way that would become characteristic of a lot of their later, black metal albums. But in a year like 1991, which was actually a lot thinner than you'd expect for quality output, this was a welcome voyage into despair which made almost anything else that year seem happy by comparison (excepting Paradise Lost, Root, and maybe the more rockin' but similar Entombed). This is certainly deserving of its cult status as far as Scandinavian death metal, and it still sounds excellent after almost 20 years have passed, but your enjoyment may be limited if you only care for the band's black metal material. And I know that I, personally, and probably most of the world, was not expecting what would follow this...