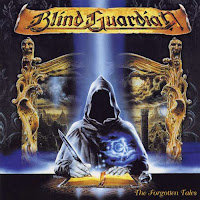 There are two sorts of artist compilations available in the musical industry: the first category consists of simple efforts to fleece the musical fan of a particular band or artist by reprinting material on a new disc (perhaps remastered, perhaps not) with new artwork, and shelling it out for an industry standard retail price; and the latter is an actual love letter from an artist, generally a collection of live or demo material, unreleased songs or a gathering of B-sides, which ultimately could save the band some money from having to import rare singles and such. The Forgotten Tales falls into the latter camp, as it's mostly a collection of cover songs and alternate versions of previously released tracks.

While a few of these tracks are actual gems, I'm going to argue here that most of this release is poppycock; you could skip it entirely and be none the worse for wear. First, Blind Guardian are huge fans of classic rock, as well as the obvious hard rock influences of the 70s that partially inspired their sound. When it comes to their covers of "Mr. Sandman" (The Chordettes), "Surfin' USA" (The Beach Boys), and "Barbara Ann/Long Tall Sally (again the Beach Boys), I could really live without. It's not that Blind Guardian sound horrible or awkward performing them, they function as silly curiosities for a single listen, and then become too corny beyond that. You're not going to find some sod queueing up "Mr. Sandman" on his iPoD: "Guys, you've got to hear this shit, it's an amazing and totally unique spin on an old classic!" And if you do know that guy, please end his suffering and do the world a favor.

Far better are the covers which seem to make a lot more sense. "The Wizard" works because Uriah Heep is a kickass band and undoubtedly a huge influence on the Germans. Queen's "Spread Your Wings" fits the band quite well, and this is one of the better covers you will find of those gathered here. But the real surprise is the cover of Mike Oldfield's "To France", given the full lavish Blind Guardian treatment with powerful chords, leads and excellent Hansi vocals. This one was good enough to include with an album (as opposed to "Barbara Ann"). In addition, if you plan on purchasing this compilation, grab the 2007 remaster/re-release because it includes their covers of Judas Priest's "Beyond the Realms of Death" and Dio's "Don't Talk to Strangers", the latter of which I enjoy more than the original.

Also in this collection are a series of alternate versions/takes on some of Blind Guardian's popular tracks. "Bright Eyes" and "Mordred's Song" are given acoustic treatments, and while they pale in comparison to their heavier counterparts, they're decent to play for the girlfriend, who is going to think you're a dork either way for listening to this band unless she's really cool to begin with. "A Past and Future Secret" doesn't really belong here, you've already heard the track in all its glory on Imaginations from the Other Side which dropped a week before this. The orchestral takes on "Lord of the Rings" and "Black Chamber" are quite good, and the closing orchestral/instrumental version of "Theatre of Pain" is hands down the best thing you will hear on The Forgotten Tales.

So, this release is not quite a fleecing of the band's fans. Although much of the material is reprinted here from the band's singles, you might end up spending less money on The Forgotten Tales than those...though some of them include demo tracks and the like. The only tracks here I found worth my time were the orchestral takes and the covers of Uriah Heep, Queen and Mike Oldfield, but I'm not sure that selection qualifies a purchase. If you're the diehard type of power metal n00b whose universe begins and ends with Blind Guardian, Dragonforce, Symphony X and HammeFfall, then you probably own this already and do not care. Otherwise, weigh the value of having the few worthwhile curiosities before plopping your cash down on it.