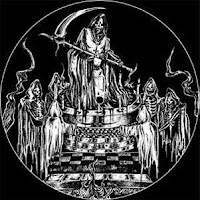 Nocturnal Blood is the product of a single man, known here as 'Nocturnal Ghoul, Spirit of Darkness', who also goes by Blasphemer in his thrash band Street Force or Blasphemer, Nuclearwhore of Black Blood in the now defunct black attack Nuclear Desecration. The Ghoul performs all the instruments on this recording, and it won't take long to figure out how it fits right in with the rest of Hell's Headbangers recent output, a hybrid of black and death metal which attempts, and to an extent, succeeds in sloshing a fresh bucket of goats blood across the face of tradition. This is meaty, violent, and simplistic aggression which lacks anything by way of ambition, or to the logical extent, any of the pretentious values that can accrue.

It's merely a series of raw and vile guitar rhythms, laced in huge, reverbrous atmosphere, that stretch above the pulverizing drum core and the on/off grunting and snarling of Ghoul's ill intentions. The rest is up to the listener, and this listener was at least satisfied for the 11 minute playtime. There are two original compositions, the "Invocation of Spirits" and "Blood Impurity", both with similar riffs that occasional lapse into a grim, old school death metal breakdown. Occasionally Ghoul will visit a third vocal, a kind of harsh, stuttering whisper which he uses in the bridge of the title track, but this about sums up the recording. The third track is a cover of Hellhammer's "Reaper", from the Triumph of Death demo, and it sounds even more oppressive and carnal than the Nocturnal Blood songs.

Nocturnal Ghoul is playing to that niche audience of old school, necrotic purists who prefer as little deviation from their source influences as possible, and if you count yourself among that elite legion, then the Invocation of Spirits EP (and previous Nocturnal Crucifixions EP) should provide you with enough fun to snatch the 7". It's nothing exemplary, but the man knows how to party like it's 1989 and all hell is breaking fucking loose, beginning at the local cemetery.