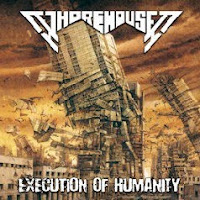 There is a lot of variation in Polish thrash metal, which is interesting when you look at the death or black scenes of that country and often find unified parallels amongst the artists. When I think of Polish speed or thrash metal, my mind settles on the highly progressive Wolf Spider or the violent Teutonic riffing of Egzekuthor, but Whorehouse represent an entirely different brand of thrash, with thick and meaty groove riffing that recalls Bay Area bands like Defiance, Testament, and early Machine Head, with perhaps a dash of Pantera and Exhorder. While some might turn their nose up at some of the source of those comparisons, Whorehouse actually perform well within this style. They can't be attributed for writing extremely original or captivating riffs, but the eye catching cover art does promise a good ass kicking for you and your entire species, and to that extent, the record delivers.

While the drumming is rock hard and competent, the true focus of this album is in the guitar tone. They could seriously mix concrete with these guitars, because they are forceful and full, meshing well with the band's melodic solos and occasional lapses into a warmer alternative to death metal. What I am most reminded of is The Ritual from Testament, but the tone is not quite so crunchy. The vocals of Seba are like a blend of Chuck Billy, Steev Esquivel and Kyle Thomas, angry and middle classed. This is probably a hard working guy, and he transfers his anger directly to the music, which always made for the best thrash (he can also rock a bass).

I am impressed with the consistenty of Execution of Humanity, but then, it seems a long time in coming, as the band formed in 1995 and released on a few demos before finally arriving at this. Basically, if you like one track, you should like most of them, but to pick some favorites, the Testament-like bounce and swerve of "True Living", the wailing and barbaric "Slow Burn" and the machine-like chugga of "New Life", which is nearly impossible NOT to headbang to, even though it exists on a series of very familiar sounding riffs. But these are not alone, for the album has an entire slew of decent songs like the poorly titled "Ex Termin 8", the bludgeoning "Friendly Fire" and the driving, downtrodden title track "E.O.H." with its gorgeous, if simple leads.

As you can tell from the song titles and comparisons to other bands, Whorehouse are not an original band from a chronological standpoint. However, at this point in time, there are very few European bands who go for this particular Bay Area style of thrash metal, so Execution of Humanity is rather welcome as far as I'm concerned. It's just some honest guys playing the metal they love, and never becoming a bevy of (seemingly) alcohol addicted wasted youth like so many of their younger peers. It's not as if Whorehouse are some new kids on the block, they've been at this for 14 years, but it's nice that they finally got their shit together to release this album. If you are looking for a fix along the lines of Defiance, Forbidden, Testament, or Machine Head, you can certainly do yourself a favor and check this out.