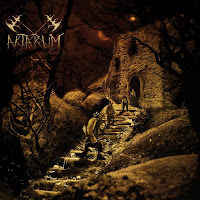 Before you listen to the full-length debut of Belgium's Aktarum, you should probably ask yourself: does the world need another troll metal band? Certainly Finntroll do not own any patent on the use of the mythic fantasy beast as a tongue-in-cheek concept in metal, but as that band has already come and conquered the niche, it seems somewhat redundant to have other band's carrying that flag. Aktarum is far from the first, as we've seen and heard bands like Trollfest who are so bereft of qualities that they are hardly qualified to troll my toilet.

Though the idea is stagnant as a camp full of the creatures, Aktarum at least are not a terrible band musically. But this assumes that you enjoy the simple bombast of a band like Thyrfing or Turisas, where the keyboards provide a dominant atmosphere over the bludgeoning drums and a bunch of guitar riffs that don't stand out very much of their own accord. Lyrically and conceptually, the band wears its heart on its sleeve, for the song titles are (expectantly) a long series of phrases including the word 'Troll' (with one exception). So you're listening to an album called Gang of Trolls, with songs like "Spiritual Troll", "Jurassik Troll", "Black Troll", "Troll Bard", "Victory Troll", "Troll Army" and "Imperial Troll". It was funny, for about 30 seconds, but no, I'm afraid this album will live or die based on its music.

And while harmless, the music does not offer much compulsion unless you are a serious diehard for the lighter side of the 'epic metal', as in the aforementioned Thyrfing/Turisas. Tom's vocals rasp and bark from one glorious rhythm to the next. The tracks are so consistent that it becomes difficult to differentiate them, especially as the album features 14 tracks and almost an hour worth of music. "Fight to Death", "Troll Army" and "Imperial Troll" might make a decent backdrop for your Warhammer Fantasy tabletop battles or other cheesy fantasy endeavors, or perhaps a Dungeons & Dragons battle grid. If you've got a really cool girlfriend, maybe she'll swing on your arm for a few beats to "Troll Bard". If you are preparing for your next LARP battle, you could play "March of the Trolls" as you apply your Braveheart face paint. In other words, there is nothing really 'bad' here as far as the music, but its hardly inspiring unless you can apply the experience to the flightiest of fancies.

Aktarum are obviously not taking themselves or this album too seriously. They are a bunch of guys writing troll metal (perhaps TOO troll) and having a beer and a good time. For this reason, it is difficult to dislike the Gang of Trolls all that much. It's clearly not very good, but there are some situations at which you could put it in your CD player and get some laughs. If the same band took a different lyrical approach, improved the guitars so they can match up with the primed battle synthesizers, then they could probably craft something greater. As it stands, this debut is merely a dalliance to kill an hour painting miniatures or drawing Lord of the Rings fan art. But for now, I'll stick to the far stronger Finnish version.