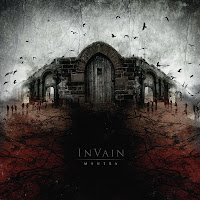 Norway's In Vain are another band that grow quite harder to pin down, and there is really no need for such tagging, as it is obvious from their compositional style that they are not in search of any such labels, just to provide a complete and atmospheric listening experience that should, ideally, leave a scar upon the soul of the listener. But to get as close as I might, think of Mantra, the band's second album, as a hybrid of black, doom and progressive metal. It moves slowly for the most part, powerfully, like a river passing by various epochs of history, both bloodied and mellow, on its course to a sea of dreams. On the first listen, I admit I found much of the material quite dull, but only because I was not taking it at its face level. My next impression was that there is simply more to In Vain than the very simplistic, bruising rhythms and glimmering melodies of its surface...which might conjure memories of Katatonia's middle years save for the different vocal style and the more airy production values, and overall diversity of sound.

"Captivating Solitude" starts with a light acoustic flavor which seems like something a 90s alternative/grunge rock band might have written for a hit, but before a Kurt Cobain or Chris Cornell can emerge here, it swiftly transforms into thundering melodic black/doom, with layered snarl/growl vocals that deliver emotional power almost instantly. I'd also note the organs, and the drums of Stig Reinhardtsen which get interesting as he builds a march rhythm into the bridge. "Ain't No Lovin" takes more of a subdued, death/doom approach, with a creeping rhythm reminiscent of something from Morbid Angel's Domination, ala "Where the Slime Live", only not so murky. "Mannefall" seems to come out of nowhere, a bluegrass/folk song which sounds like it belongs on a Mississippi front porch as the sky darkens for a coming storm. I guess that makes "On the Banks of Mississippi" no real shocker...a fairly catchy, choppy melodic doom track which really excels at the spaces between its plowing rhythms, where the drums breathe into the nothing. Hearing a Norwegian band focus on the South is...well, invigorating!

"Dark Prophets, Black Hearts" veers into more of a traditional doom/death, ala Candlemass meets Opeth meets Paradise Lost, with a weavy plucking rhythm through its gargantuan chords. However, this is only the beginning, because it takes on an upbeat melodic death visage after a moment or so. "Wayakin" is a 9+ minute tribute to the Native peoples of the Pacific Northwest US, and the vocals here are a mix of tribal chanting and then soaring chorus vocals with manly, mantric backups. It's a pretty fascinating track that stands out even among its varied neighbors, and once again, I reiterate: hearing a Norwegian band that sings about the ancient past of my own country, rather than the other way around, is very refreshing! "Circle of Agony" has a nice, melodic descent in its opening moments, and the dual growl/snarl vocals appear once more to add a strong effect of gloom. This is perhaps one of the finer tracks on the entire album, almost irresistable as it snakes about its central themes and frolics through one conquest to the next.

"Sombre Fall, Burdened Winter" is over 11 minutes of melodic, doomed angst, in which the vocals once again take on a minor shift towards a cleaner, barking tone. The acoustic/piano breaks in the track are nicely laid out like a snowy plain, and the whole atmosphere past 4 minutes when the song becomes a somber environmental folk piece is really nice. The bonus track "Wayphearing Stranger" is a cover of the traditional folk tune, with dual male/female vocals, and it is of the quality that In Vain should probably try and get it on the soundtrack to some independent film, because it could stir up some real buzz (though the audience would be shocked when they hear the metal tracks).

Despite the pristine production standards and killer concepts behind the album, not all the music is equally engrossing. Some of it sounds like the garden variety, big budget death/doom that a lot of Scandinavian bands produce, but then some of it is quite fetching and memorable. What I was most impressed with was the sheer diversity and the lyrical matter, which I simply would not ever expect from a Norse band. In the end, In Vain have something just different enough to offer that I feel they are a compelling band, even when the music itself isn't the type you'll be looping again and again in your head.

Highlights: On the Banks of Mississippi, Wayakin, Circle of Agony, Wayphearing Stranger