Blind Guardian - Imaginations from the Other Side (1995) 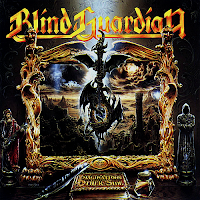 Though the progression to Imaginations from the Other Side from the previous albums seems only natural, the band's 5th album would also mark a shift in sound and recording. This is the first album where the guitars would transform from their brazen German speed and power into a more processed tone, and where the band's multi-pronged vocal chorus attack would become the rule rather than the exception. This is the Blind Guardian you will become accustomed to for the next 15 years, for better or worse. But regardless of the arguments to be made for/against such details, Imaginations from the Other Side is one hell of an album, their most consistent up to this point, cementing their status as a top ranking German band and helping forever change the game for traditional power metal as it was forced to mutate and co-habit the 90s with its more extreme stepchildren in the belly of the Digital Age.

The title track leads from the center of the battlefield, its rapidly picked melodies and thundering, steady percussion escalating to a fist pumping rhythm at 1:10 that gathers up chug like a stone gathering moss, before the soothing, tranquil chimes and vocals of the pre-chorus, the majestic, sailing guitar melody, and then the chorus climax, which cruises over the stream of subtle, writhing melodies set below in the mix. The charging, melodic bridge late in the song gives an impression of classic Maiden, and though it's the longest track on this album (over 7 minutes), I was never once less than immersed in its intricacies. This was the new, modern Blind Guardian, folks, and I was hooked. "I'm Alive" opens with a brief battery, then a segue of scintillating acoustics, and the trampling resumes with Thomen Stauch taking names and kicking ass. The acoustic break at 1:10 is a perfect example of how the band has mastered a hybrid of Romantic and Medieval aesthetics with gut-wrenching heavy metal power. "A Past and Future Secret" ups the game on all of their previous balladry, a rousing and unforgettable piece with acoustic guitars, orchestration and atmosphere.

"The Script for My Requiem" has an opening reminiscent of the band's 'Guardians of the Blind' charge from previous songs, before it lapses into thick, brooding chords and flurries of bristling speed metal, and the band's Queen influence shines through once more with a huge chorus. Yes, if Freddy Mercury and crew were thrashing up Hobbiton with rubber swords and cloaks, this would be the soundtrack! "Mordred's Song" begins in wondrous acoustics and a great little lead that reminds me of something Andy la Rocque would write for a classic King Diamond album, and then a slow trotting rhythm after the verse which falls back into acoustic bliss. As they have many times before, Blind Guardian show here why they are the masters at the 'bridge' of a metal song, as a series of captivating rhythms and leads loops around to the return of the final verse and chours. "Born in a Mourning Hall" explodes into an anthem of soaring, melodic flair which would have made for a perfect battle theme to the classic color Flash Gordon film. Of note is the ever thundering Thomen Stauch, whose drumwork brings glory to all the man touches, and then the huge vocal chorus hook, with its playful tails.

Oh, I know this can't go on
but the ghost called fear inside
lames my tongue, my nerves, my mind

And though the album had thus far been excellent, it was about to get even better, with the mesmerizing "Bright Eyes". If I had to draft a short list of favorite Blind Guardian tunes, this one would be just shy of "Journey Through the Dark" and "Time Stands Still (at the Iron Hill)". I absolutely adore the 80s pop elements like the repetition of 'watching you', and then of course the chorus is so good that I started crying when I saw them perform it live. What a pussy! On that note, I'm sure a great many women' bits were tingled to this track, as it is unabashedly beautiful as it basques in its own steaming, streaming glories. "Another Holy War" picks up the pace, majestic and searing with some welcome aggression in Hansi's strangled tones. "And the Story Ends" may not be an oft-spoken of track, but it's a strong finish to a superb offering, with huge chords, a mountainous atmosphere conjured through the vocals, and adequate closure to the saga of Blind Guardian's transformation into a new realm of possibility.

Imaginations from the Other Side is an album worthy of its title in mystique and musical evolution. There was no other band out there barking up quite the same tree, and along with its mindblowing successor Nightfall in Middle-Earth, this album represents to me the apex of this band's storied career. My only gripes with this album are quite inconsequential in the grander scheme of things. Of its 50 minutes of playtime, there are perhaps 4-5 which do not provide the ecstasy and wonder of the remainder. And while I'm not a huge fan of the guitar tone in the chords, which reminds me a lot more of the compressed sound used by Iced Earth or Kamelot than the previous Blind Guardian albums, it doesn't cripple any of the songs, which are so good that the album could have been recorded with banjos and a washboard and still probably ruled.

Highlights: almost everything, but bring a handkerchief for "Bright Eyes".