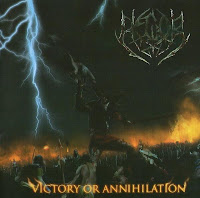 Hedor is an insane Colombian death metal band, and like many of their countrymen (Ancient Necropsy, Internal Suffering, etc) they perform with a grating, infernal energy which seems difficult for mere human beings to pull off. Victory or Annihilation is a tiring debut through which these three men channel all their demons into a punishing physical exercise, which, while entertaining for short spurts of time, inevitably fails to make itself memorable, due to the sheer lack of dynamics on parade. This band moves quickly, and I rather enjoy the caustic, crisp crunch to their guitar tone, not to mention the monstrous efforts of skin basher Nelson Socha who attacks with wild but machinelike precision. The solos here are truly terrifying things that bubble to the surface like human bones and eyeballs in a cauldron, and occasional a guitar riff will rip forth from Hell itself to catch your attention as to the potential slaughter.

Choosing from individual tracks here is rather a difficult task, as many of them simply slash you and crash you and beg no quarter. "Black Medium the Great", "The Battle of Ragnarok", "The Birth of the Leper" and "Solve and Coagula" all burst through the seams of the Earths' crust amongst the abyssal minions and strip, rape, strangle like an unblessed union of Morbid Angel, Nile and Hate Eternal. Far better than these is "Hemef", with its mystic conjurations of eerie melodic grace amidst the blasting punishment and sheer, ripping force that etches away your skin like a nuclear wind. When the band dares to travel at a slower velocity, as they do briefly in "Victory or Annihilation" or "Muerte mi Enigma", you begin to get the clearer picture of how effective they could be if they'd only break up the spasmic bursting a little more often.

Victory or Annihilation is only going to appeal if you actually relish the unrelenting speed and attitude of a band like this. A better example of this style would be the latest album from Vomepotro of Brazil, also with a biting guitar tone. But if you really do enjoy the more brutal side of the Colombian scene, it couldn't hurt to check out Hedor. This band has the firepower and accuracy to succeed, but they could use a little work on their aim...