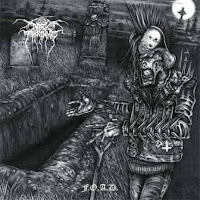 Judging by the increased speed by which they are releasing new material (their most productive period since the early to mid 90s), it's become clear that Darkthrone are quite happy with the new direction they've taken. The Cult is Alive was only the loading station, and with F.O.A.D. (you know what it stands for) the band would move further down the tracks into a new territory. Yes, this album represents the biggest change in the band since they dropped the death metal and got their black on in the dawn of the 90s, and yet, it remains strangely loyal to all the band has accomplished to date. Change is never a bad thing so long as its a well planned departure, and the decision to let the classic metal and punk influence play a more central role to the songcrafting has opened up a new realm of possibilities.

There are a surprising number of subtleties here, through the guitars in particular, which might not have been possible on another Transilvanian Hunger or Hate Them, and the rock focus here really leads the band into a fertile pasture. They've already mastered black metal, several times in fact, so what more could they do with it? This is your answer. Equipped with the new 'Mr. Necro' mascot on the cover (Deathhammer logo in tow) and a new approach to their lyrics which is at worst forcibly silly and at best pretty cool, they strap on for nine new tracks that run the gamut from the vile and muddled to the spry and wistful.

"These Shores are Damned" is a superb opener, with a graceful, classic sense for melody translated through subtle speed metal rhythms and groovy drumming (not unlike something Deceased might write). When Culto begins to bark out the verse, though, it shifts back to a pure, rocking Darkthrone rhythm, and there's a great, popping melodic lick which breaks out before 2:30 in the track which transforms it all into so much more. "Canadian Metal" is a pretty amazing song, making better use of their Hellhammer-inspired rhythmic slamming chords than they've had in years. The lyrics are a little hokey, but fun, as they name-drop a bunch of song titles from Canadian legends like Razor, Piledriver, Sacrifice and Slaughter. Being that I'm a pretty big fan of several of these bands, it is hard not to applaud the tactic, though I haven't enjoyed bands using it before (I remember Seven Witches doing something similar and it sucking awkwardly). At any rate, the song itself smokes. "The Church of Real Metal" follows, and while part of me thinks the band might be taking this too far, the song itself is actually not some shallow Manowar-athon, but a brooding and dimly lit doom rock anthem with some great, depressive atmosphere created through the melodic guitars (and I think a synth is in there). The term 'metal' is only uttered with the actual song title, as the chorus, so it could have been much worse...

"The Banners of Old" is another track in which you can hear a clear influence from doom bands like Sabbath, Black Widow and so forth, but it quickly spins into a groovy, grinding speed/death riff which is extremely catchy, as Culto's thick vox slobber all over it. "Fuck Off and Die" is loud arena mayhem rock, similar to AC/DC but with an even more bluesy twist to it, with Fenriz performing some corny and soulful vocals that slowly pull you in, even if you don't want them to. There's a nice, melodic doom break in the middle, one of the best riffs on the entire album. "Splitkein Fever" has a quiet, thumping beat layered in churning, grungy gothic deathpunk guitar lines, and it's quite effective with the lyrics, though the 'flies to a pile of shit' cliche did come across a little forceful.

"Raised on Rock" is probably the "Too Old, Too Cold" for this record, the true anti-poseur anthem. Some might find the lyrics a little too blunt and obvious, but that had to have been the point here, and the raw vocals and dark punk rock riffing make it all quite sinister. "Pervertor of the 7 Gates" is big doom metal, and here Fenriz puts a ghastly twist on his Tom G. Warrior vocal aping, though the hooks alone are not the best you'll find on this record. F.O.A.D. goes out on a high note with "Wisdom of the Dead", one of the most beautiful tracks the band has written in years, with a soaring death melody and a slowly grinding central rhythm that gives way to a morose, necrotic atmosphere, and some further melodies that arrive and dazzle later in the song. Even if I were to ignore the rest of the record, this song alone is proof positive that Darkthrone's new direction is a success, because where on one of the previous albums would you hear this? Possibly on Total Death, but the production would be far different.

F.O.A.D. is a fantastic album, but even at its apex, it is still only the footprint for the giant boot in the ass masterpiece to come in the following year, Dark Thrones and Black Flags, the band's first flawless work since Transilvanian Hunger. But there are 6-7 songs here that belong on any Darkthrone playlist, from the hell fueled "Canadian Metal" to the more lurid "Wisdom of the Dead" or "The Church of Real Metal", or even the balls deep "Raised on Rock" and "Splitkein Fever". This is some pretty intriguing shit, and honestly, if even the most stubborn expatriates of the Darkthrone camp could set aside their crockety old badger dispositions for 40 minutes, they would find something here they might really enjoy, even if just in fun.

Highlights: These Shores are Damned, Canadian Metal, The Church of Real Metal, Raised on Rock, Wisdom of the Dead