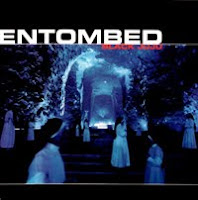 The Black Juju EP was a one-off release through the coveted Man's Ruin records, known for putting out a lot of the critical stoner rock and punk artists that helped that style flourish once again in the 90s. Like the Wreckage EP from two years before, it primarily consists of cover tunes, and in fact, if you purchase the CD version, you actually get the four Wreckage cover tunes as an added bonus. The difference is that the covers you'll find on Black Juju are all pretty good, and some of the better that the band have collected in their many years, and the one original here is also good.

"Mesmerization Eclipse" is a cover from L.A.'s cult rockers Captain Beyond, and the constant, blues grooving is a tight fit for where Entombed were at in the mid to late 90s, that is to say, this band was a direct influence on the Swedes and it makes a little sense to pay them tribute on a recording. Much of the track consists of the same two rhythms, but there is a little jamming and a nicely slicing lead, and the mix of the song places it firmly in space rock territory, where it belongs. "Vices by Proxy" is the Entombed original, a burning rocker lavished in some wailing leads and a surging, cruel punk undercurrent. In particular I like the chugging breakdown, with Petrov's vocal pattern really digging in and playing off the beat.

"Black Juju" is like a deeper, darker take on the Alice Cooper original, and by far the best cover Entombed had done by this point, superior to their KISS, Twisted Sister or Dwarves covers. I really love the original, and I really love this version, with its thumping tribal percussion and keening wall of guitars, sharpened against countless hippie skulls. Heavy shit. "Sentimental Funeral" is a cover of Hey on Glue's bluesy, balls-out rocker, perfect for skulking about any local waterhole with an axe and a pack of cigarettes, trying to figure out who or what to take out your ex-wife frustrations against. I'll be honest, I know nothing about the original or the band that wrote it, but the song is fun enough, with some swaggering Sabbath-like doom in there.

And, of course, if you own the CD, you have the cool covers ala Twisted Sister and the Dwarves, and the rather bland renditions of Bob Dylan and Jerry's Kids. But the real value, if any, is the material new to this EP. Once again, I must re-iterate that you can have ALL of these cover songs, and many more, if you purchase the Sons of Satan Praise the Lord compilation, which was obviously not available back when this released. That release is a far greater value than all of the constituent EPs, singles and b-sides that comprise it, however, you won't find "Vices by Proxy" there, so Black Juju still retains at least a little of its value.