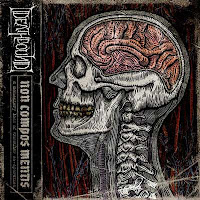 Deathbound is no newcomer as far as the many Scandinavian super groups are concerned, they've been about for a decade now and have now released their 4th album, Non Compos Mentis, through Dynamic Arts. The band contains a few members of Havoc Unit (formerly ...And Oceans), Deathchain, and former members of The Duskfall, with a deathgrind style that should hold great appeal to fans of other Swedish and Finnish bands like Nasum, Coldworker, and Rotten Sound. Having heard only their previous album We Deserve Much Worse, I really wasn't a lot here; while that was a tight and energetic affair, it didn't have a lot on offer by way of hooky riffs or the towering grooves this style lives and dies on. Not the case with Non Compose Mentis, because it pretty much flat out kicks your ass through almost all of its 30 minutes and 14 tracks.

Anyone who listens to d-beat, grindcore or death/grind will know exactly what to expect here, the massive Swedish guitar tone used for both walls of grinding chords and speed picked death rhythms, with most songs falling around 2 minutes in length. Deathbound owes as much to Entombed as they do Napalm Death, and they do their elders proud with ragers like "A Reason for Your Fight", "Strain" and the immense grooving of "Hell Could Be the Cure", so pummeling you might think it was Obituary jamming with Comecon. Other, more deathlike fare exists here in the form of "The World is But a Memory", and if it's a total Entombed shakedown you seek, check out "A Better Tomorrow" or "Free Shackles for Everyone". Kai Jaakkola has a slamming vocal style which sounds like the more brutal side of Nicke Andersson, and the band practices the same set of production standards that Rotten Sound and Nasum pretty much set up for this entire scene. The lyrics are also the socially conscious variety you would find from Napalm Death or Nasum, so the appeal here will extend beyond the metal sect into the more active grinder or hardcore fan.

Whether you find yourself linked to this d-beat/grindcore scene through the sounds of Nasum, Skitsystem, Disfear, or even something more modern like Trap Them, Deathbound has just the right amount of poison to keep you drunk on the power. There's nothing new here, though, so if it's creative grind you seek, check out something like Poland's Antigama. The riffs are catchy but rarely pronounced, and it's probably best listened to in its entirely, a 30 minute blast of focused violence that will likely stand at the front end of a number of hospital trips in the coming year.

Highlights: A Reason for Your Fight, Hell Could Be the Cure, The World is But a Memory, A Better Tomorrow