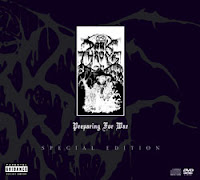 It's only fair up front to admit that, if we are judging by consistent quality and full body of work, Darkthrone is by far my favorite black metal band in the world. Not only this, but I feel they are the most influential as well. Burzum, Slayer, Hellhammer/Celtic Frost, Mayhem, Mercyful Fate, Venom and Bathory are also major direct influences on the many thousands of bands to spawn since, and important ones, but the overwhelming majority of cult underground or 'bedroom' bands, even to an extent the entire depressive scene, owes a lot to the Norwegian duo (who themselves carry the influence of several on that list). Not only this, but Darkthrone have an uncanny knack of subtly re-inventing themselves throughout their discography, without ever making a tasteless choice in direction. The band have had their critics through the years; as with any cult fanbase, a sect of stubborn young (old by now) men that, in their audio xenophobia, refuse to embrace any subtle shift in tone or style, expecting the power of their own nostalgia to convince a band to release the same, identical album forever, but in my opinion, Darkthrone have trumped all takers, as there is not a single album in their history which I don't at least consider to be great.

So, you could call me a fanboy. I really can't help it; this band represents every quality I love in musical disposition and follow through. Fuck trends, fuck narcissistic rock stardom, fuck scenes, and fuck you. This is BLACK METAL. It is not intended for corporate sponsors, groupies, fashionistas, motion pictures, cartoons, or any form of mass appeal madness. It is not intended for happiness. It is the polar opposite of brainwashing, mindnumbing feces like Lady Gaga, Avenged Sevenfold or Killswitch Engage. It caters to the few, the individual, and the listener with the rare ability to transcend the surface, to shuck the superficiality of the music industry and even to an extent, the entire shallow 'metal' image. A little hard to believe, perhaps, since people believe fire breathing, leather and spikes are all synonymous with metal, and as stage effects, they have been. But most great metal acts have a lot more to say than just to play to some fucking lightshow, and as situationally self-aware and oft comedic as they have become, Darkthrone is one such legend.

All legends deserve tribute, but I was honestly pretty surprised by the decision to release a compilation album. I'm not sure if it was more Peaceville's idea or Darkthrone's. Judging by the classy, honest presentation, both must have had an involvement here. But let's back up a second. There are TWO versions of Preparing for War, one released in 2000 which only features a single disc, and an expanded, limited release in 2005 which features two discs and a bonus DVD. You DO NOT WANT the 2000 edition. Trust me, if you can find the later version, it is worth the extra money you might pay, because there is more material offered and thus the inherent value is superior. I am not a fan of compilations, in particular collections of previously released material, and I can only imagine any Darkthrone fan worth his salt would already own the actual albums, since it's an underground privilege! At best, they will offer a lot of hard to find, rare material, b-sides, demos, and the like. The special 2005 edition of Preparing for War does exactly this, but you do have to wade through a bunch of redundant album tracks to get there.

Disc 1 consists of 15 tracks (the original Preparing for War release), which collect tracks from the first four albums of the band, including Soulside Journey, which is represented here by "Grave With a View", "Cromlech" and "Iconoclasm Sweeps Cappadocia". "The Pagan Winter" and "In the Shadow of the Horns" from A Blaze in the Northern Sky are present, as are "Natassja in Eternal Sleep" and the title track of Under a Funeral Moon. Transilvanian Hunger gets three offerings: the title track, "I En Hall Med Flesk Og Mjød", and "Skald Av Satans Sol". All good choices, but you've already heard them... Far more interesting would be the inclusion of "Snowfall" from the New Dimension demo (1988), a 9+ minute instrumental composed of doom, death and thrash/crossover rhythms over Gylve's drumming. It's essentially a rehearsal track, so one cannot expect much in terms of sound, yet it does develop some decent melodies and it's not bad for background noise. "Archipelago" from the 1989 Thulcandra demo is also present, a raw death metal track with a heavy Hellhammer and Slayer influence, and wild vocals that range from great grunts to the off resonant, silly snarl. Another treat is the inclusion of some live material from one of the band's only appearances in Oslo, 1989. The band performs "Eon/Thulcandra" and "Soria Moria", and I'd be lying if I said that hearing these did not make me jealous that I simply couldn't have been there (in my defense, I was a doe-eyed 14 year old who had yet to even heard of the band). There is another live rendition of "Neptune Towers" here which rounds out the disc, and this is pretty fucking excellent and the best thing on it.

Disc 2 makes the package all the more worthwhile if you don't already have access to the band's demos, though the later Frostland Tapes compilation has a more orderly, completist approach to this. Most of the 13 tracks here are demos/rehearsals of material from the first three albums, including some good and raw versions of "Under a Funeral Moon", "Summer of the Diabolical Holocaust", "Kathaarian Life Code", "Where Cold Winds Blow", and so forth. Once again, everything here is redundant if you've got the studio albums, and there is no version here that I might place above its album counterpart, but at least it's not 100% riff for riff the same. The DVD (Disc 3) is probably the most worthwhile of the three, because it catalogues the band's rare lives, from their Oslo TV spot in 1989, to their Riihimaki Finland 1991 set, Lahti Finland 1991 set, and Oslo in 1996. Most of us are never going to see this band live, ever, which in a way I find satisfying...because it's pretty much as anti 'rawk stah' as it gets. But if you wanted to, you could always witness them in the early days with this. There are also some additional interviews and a photo gallery on the DVD.

Preparing for War is really only worth it for hardcore fans of the band, and even then I would absolutely not recommend that you waste money on the original 2000 edition. You can get all the thrills of this material on the respective albums (and demos), but the DVD represents most of the value in this package. If you just want all the demos in their pure form, get The Frostland Tapes instead. Otherwise, if you're new to the band, I'd advise you to dig right in with some of their earlier albums, and observe for yourself the slow process by which they evolved into their more recent punk-metal style, from their bleak and beautiful past.