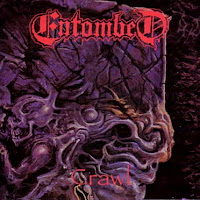 After the crushing and unforgettable Left Hand Path, Entombed played musical chairs with their vocals for a year or so before Lars Göran Petrov returned for Wolverine Blues and all was right in the crypt. This meant Nicke Andersson on vocals for the excellent follow-up Clandestine, but for this brief 3-track EP the band recruited Orvar Säfström of Nirvana 2002, another Swedish death outfit who never made it beyond the underground demo stage. I tend to view Petrov and/or Andersson as the penultimate frontman I identify with all the band's better work, so Säfström's approach is not my ideal. But still, the guy has a pretty decent coughing, hacky voice which, applied to this mix of the songs, is more than passable. For fuck's sake, you could have a caged monkey stoked on PCP-laced bananas provide vocals for Entombed in their prime and it would still have sounded awesome.

The Crawl EP is another of those releases which, due to its rarity, has been made redundant since its release. Unless you are a collector of the obscure, there is probably no reason to ever hunt it down, since it was reprinted as a part of the Entombed compilation in 1997, which is very much worthwhile (as it collects a few of these EPs). The title track is taken from Clandestine, and it's an excellent anthem to the grave, with overpowering chords and eerie strings of old school death melody. The huge groove at 2:00 is worth hearing alone, but the rest of the song is equally memorable, including the bluesy graveyard lead and the more atmospheric howling vocal used in the latter half.

"Forsaken" was the biggest draw for me, as it did not appear on either of the band's first two albums, and perhaps it should have. It really kicks ass, with wild leads that weave through thrashing rhythms in Entombed's trademark, broiling mass of guitar tone. Possibly the best part of the song is the segment that begins at :45, a total forward momentum that forces something inside you to erupt as it bludgeons into some great melodic chords and then a horrific, beautiful sequence at 2:00 where Hellid and Cederlund perform some great, classic metal melodies; there is even a bass guitar freakout. In retrospect, this song may actually be a little too busy and choppy. A mess, but a beautiful mess. The final track here is "Bitter Loss" from Left Hand Path, reworked with the newer vocals, and it's just as potent as ever, with its frantic clawing like a shambling corpse locked inside the morgue.

Crawl would have been a nice treat for the fan who actually could find it right as it dropped, but these years it is completely unnecessary, unless you like staring at the cover art and joining pissing contests about all the wastes of space you have collected. I used to have the cassette version which sounded nice and fat on my stereo, but as the Warden of your Wallets I proclaim that you should simply purchase Entombed (1997) and have your way with its private bits, rather than waste the money here. Also, the promixity of Clandestine's release to this EP kind of set it by the wayside.