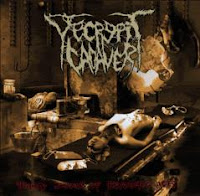 Decrepit Cadaver is another of those bands that I shouldn't enjoy simply on principle...that is, they're another of the seemingly faceless thousands of gore-based brutal death metal bands that don't really diversify themselves from the crowd. Yet there is a very tangible, disgusting impulse which lies below their choppy grunting and thrusting jabs of the meathook, well placed horror samples and twisted serial killer charisma. Yes, Putrid Stench of Psychotic Arts is the band's debut album, yet it's as infectious as the sole hooker in a backwoods South American drug villa. It's also another of those short and sweet records which blasts by in under a half hour, so even if you don't find it resonates with the carnal manslaughter hiding in your subconscious, you didn't have to spend a long time arriving at that decision.

I really enjoyed the opening autopsy sample, it builds a very creepy mood with all its squishing guts, before the band charges into "Splattered on Canvas", which is honestly not one of the better tracks here. But the next six are pretty much butcher's block bliss, in particular the hammering "Putrid Uterus Extraction", the roiling, bloody explosions of "Brutally Amputated", the turbulent breakneck chugging of "Into the Torture Chamber", and the vomit inducing, hellish thumping of "Gagging on Afterbirth". The band closes off the album with a cover of Cannibal Corpse's "Addicted to Vaginal Skin", which makes a lot of sense, as the band is clearly a huge influence on Decrepit Cadaver's dirtier, South American style.

Putrid Stench of Psychotic Arts is another album that will deliver if you simply don't go into it with any expectations outside of a desire for more brain flattening guts and gore. There is no motivation here to anything beyond attaining a level that has already been beaten to death, yet Decrepit Cadaver prove there is a little more life to stamp out in their fairly entertaining death romp. The sound here is good and raw, with a little fuzzy bite to the guitars which makes the killing that much more cheesy and endearing.