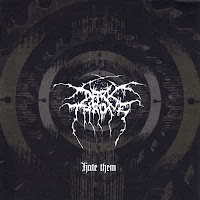 After the lukewarm reception for their previous album, something must have crawled up this duo's collective sphincter and died, leaving some residual cancer of the spirit, because Hate Them is the most fucked up and evil record the band had released since in about a decade, with a harsh, no frills production. This is the Darkthrone of the battlefield, black and white, unholy warfare captured on a still and dripping with vile humours and callous intentions, hostile enough the peel the fresh paint job off your ride and transform your life from sunshine to entropic despair. The lyrics here are seriously excellent, you can just feel the frustration that must have gone into writing them, and it translates perfectly into the rugged, hostility of the compositions.

"Rust" opens with a minimal, ambient noise segment composed by Lrz, pulsing like a blackened quasar before the guitar chords ring out and bend northward, slowing stammering into position like a phalanx of undead, decaying soldiers in WWII uniforms. The band slowly maintains this march, hammering along with a steady drum that constantly hovers over the edge of some forward momentum, which finally arrives at 3:00 minutes into the song, but only at a marginal uptempo from the previous section. "Det Svartner Nå (It Darkens Now)" is blood curdling, disgusting black with the band's usual Hellhammer meets punk rock influence, a sequence of chords that a two year old chimpanzee could pick up and play, and yet it lacks no wealth of diabolism, a tangibly gut wrenching atmosphere. If neanderthals figured out how to play black metal many thousands of years ago, it might have sounded like this.

"Fucked Up and Ready to Die" picks up the pace considerably, the fastest track on this early half of the record, with a huge death metal tone to the grinding axe rhythm and drums that charge every so slightly beneath its surface, a greatly grooving bridge, and then a segment that lapses into a monolithic, tortured doom, phenomenal with Nocturno's vocals like a monk who has just renounced his vows to finally discover Satan. "Ytterst I Livet (On the Edge of Life)" is a plodding, suicidal anthem which reeks of droning noise rock ala the Melvins, swerving into a dense barrage of twisted, depressive chords and rumbling blastwork. "Divided We Stand" is one of the best tracks here, ranging from the spikes and leather death of its opening riffs to a swelling, dank fueled punk and pumping breakdown with enough girth to fill any glory hole.

"Striving for a Piece of Lucifer" is a cool, bruising tune packed with atmosphere, and a coy lyrical awareness that reveals the roots of Darkthrone's shift into the self-effacing scene-busting entity that they will become on albums like F.O.A.D. and the masterful Dark Thrones and Black Flags. 'Let's see who stands when the smoke clears', indeed! "In Honour of Thy Name" is notable for having some of my favorite lyrics in the band's entire history, taking the pseudo-condemnation of the previous track up a notch and telling you what's what. Poseurs leave the fucking hall, please. As for the riffs, they're bouncy and punkish until the expectant breakdown into total Hellhammer rocking, right beneath some of the best lines in the song!

Half-horrified that the band might dip below their career low of Plaguewielder, I was extremely relieved by just how refreshing this album was. As they would and will do so many times through their history, it represents yet another small re-invention of their sound, drawing on the roots of their early 90s albums like A Blaze in the Northern Sky and Under a Funeral Moon but placing the murk and miasma into a new context, this one even more grim than the last. Hate Them is just another in a long line of mandatory Darkthrone recordings that I would highly advise you to purchase, unless of course you suck. Not at life, though, because these albums were written specifically for those of us who do suck at life.

Highlights: turn them off. It's better to cry in the dark.