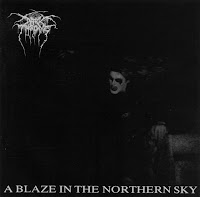 It's astonishing how something which once seemed so horrific, ugly, and niche at the time of its conception has transformed the musical landscape of its parent genre for decades, and yet that is exactly what A Blaze in the Northern Sky has accomplished. Initiating the transformation of four young Norsemen from a great death metal band into one of the flagships of the emerging black metal scene, and one of the very best that genre has and will likely ever have to offer, the album is 42 minutes of everything this style should represent, in its purest form. While previously the phrase 'black metal' was still known best at the Venom title, it was the year of 1992 in which A Blaze in the Northern Sky, Diabolical Fullmoon Mysticism and Burzum would start a fire that would burn well beyond their control, capitalizing on the direction that a few artists (like Mayhem) had already been kindling for a few years from the roots of occult metal acts like Mercyful Fate, Bathory, Hellhammer, Possessed, Slayer, and so on.

Of the three, it is Darkthrone's sophomore effort which stands out to me as the figurehead for the endless thousands of cult black metal acts to follow, as it stood against just about everything that was 'important' to metal music in the early 90s. After the thrash and speed metal genres had evolved from rugged, blasphemous onslaughts to works of technical virtuosity, death metal was manifest as its more extreme younger sibling, with bands signing endorsement deals and writing complex material to impress an increasing demand for aggression. Darkthrone were themselves a death metal band, but not in that way, edging more towards the dark themes and grim vibes of that genre's roots. In 1992, upon the release of A Blaze in the Northern Sky, that changed...I would have loved to have seen the look on the Peaceville Records execs' faces when they first listened to it (though they have no doubt turned a pretty penny with it since).

The reason being: this album goes against just about all common sense for a metal band during those years. Where most are veering into more difficult compositions, and cleaner, modern studio sounds, Darkthrone are breaking down the thrash and death metal influence to a raw fundamental. Instead of simply using lyrics as implications for the themes of occultism and the cruelty of the natural world and of Man, they were conjuring music which actually FELT cold, FELT hostile, FELT like you haven't got a sliver of goddamn hope, an endless winter closing about you like a noose. Today, it might seem like old hat to most, an album like this. But when it released, individuals had a difficult time trying to determine whether or not this was even music. And yet it was. For at the heart of Darkthrone's sound is a very loyal adherence to the aim of their forebears...the plodding murk of Hellhammer/Celtic Frost, the savage and viral raw thrashing of Bathory or Onslaught, and frenzied speed of Slayer and the more extreme current of early death metal acts from both sides of the Atlantic.

But the packaging of this core aesthetic was truly something to behold for the virgin listener. Raw guitar tones which sound like poorly recorded rehearsals, a harsh barking vocal range that few were working with by this point, far more throaty than the guttural death that had been scaring mothers and Church officials by 1992, and a sound like it was recorded in a barn, or a shack in some cold forest that people had long forgotten. In short, it's life affirming, albeit in a negative light that makes nihilism seem like a warm night spend cuddling with your honey by the hearth. This unlikely little slab of icy, ripping sinew paved a road of ill intentions, with every branching path a descent into the deepest hell of possibility. Fenriz claims the album was 'rushed' to press for their Peaceville contract, so it may even be something of an accident that the album evokes such a loose, amateur endearment, but in my opinion, that's the best kind of accident...ever. Other bands may have grown over time into the 'face' or 'voice' of the black metal movement, but this album is its heart and soul.

Of should I say, heartlessness? And soullessness?

As if this album could have gotten any less accessible, the fearsome quartet (yes, same lineup as Soulside Journey) decided to open it with over 10 minutes of the "Kathaarian Life Code". Swelling black ambiance and ritual vocals are fused with a gremlin-like, choking narrator before the blast beat surges forward at around 1:20, walls of hissing chords bristle like a storm of razor ice blanketing the surrounding earth for miles. At 2:00, it breaks into a slower, driving rock beat alongside a reverbrous death metal speed picked rhythm, then blasting forward again to a sick breakdown after 3:00 which was the heaviest fucking thing I had heard in years (and I had heard Pestilence and Obituary before this band). Everywhere, the clashing drums and fuzz of the guitars breed natural atmosphere, while the distorted bass weaves through, carving out the hearts of men. Oh yes, this is heavy, but it is beautifully goddamn vile, even as the vocals return later to spew a vomit-like pattern of groans and grunts which sound like Tom G. Warrior if he were choking on a turkey dinner. "In the Shadow of the Horns" shows a far stronger leaning towards the Celtic Frost influence, even with the 'hey' vocal to kick off the grooving, molasses guitar rhythm, still swelling with the cutting fuzz tone. The chugging of the bridge will also remind a little of Sabbath, or early Paradise Lost, and the melodic black charge around 4:30 feels like a tortured release from the confines of the oozing blackness, while Nocturno Culto's vocals howl the eternal mantras:

Yeah, grab the nearest dictionary, flip to the term 'epic' and scribble the Darkthrone logo over the previous definition of the word. "Paragon Belial" carries forward with a steady, warrior rhythm, very simple and effective chords serving as the counter ballast to the godawful, fearsome fucking vokills. The track descends into chaos after 1:00, a discordant, jangling line under which the double bass begins to roll, like a dance across skulls in a passionate netherworld night. Stick clicks, raw echoes, the band leaves just about everything right on the fucking disc, to give you the impression that you're actually present at a jam session of ghosts, witches and demon worshipping necrophiles. To anti-Christen "Where Cold Winds Blow", Culto belches forth a vocal line that seriously sounds like a man who just had his throat torn out by a bear, and the riffs of this track scream with a grinding, hardcore chaos into another raw as fuck break at around 1:20, into which the wind howls like an ayrie of fallen angels. Fast, messy, and second to none.

"A Blaze in the Northern Sky" itself is the shortest piece on the album, under 5 minutes, but home to no less sheer vitriol than any of its lengthier siblings. The savage guitar rhythm emits a very subtle shift in tone and atmosphere, and again the band sounds more like an actual hellish wind or unnatural force than a group of guys recording a record. As they break into another of their fabled slower rhythms, a frosted mirror of majesty is summoned forth, each attempt to glean one of its secrets like prying a ring from a stiff, frozen corpse, ancient eyes agape in terror from the heresy it witnessed before its passing. At around 3:00 the band goes all rock and roll, and it's excellent fun (skip ahead almost 20 years, and this spirit still remains in their sound), before they return to the doomed weaving of the burgeoning chords. "The Pagan Winter" sounds like one of their Soulside Journey tracks put through a filter of blackness, unnerving melodies and sodden dis-chord, and if you can't appreciate the powerful, dark majesty of the riff sequence at 1:30, well then, you simply do not belong in Hell. So don't let the pitchfork prick you in the ass on the way out!

Everything about this album is iconic...not only is the music as fresh today as it was in 1992, but the grim and minimal cover artwork is unforgettable, a barely discerned darkness against which guitarist Zephyrous leers in his corpse paint like a vampire closing on the kill. The band's lyrics have always been among the best in black metal, forays into their native tongue and grammatical inconsistencies excused for the exquisite agonies painted through the words. If someone not in the know were to simply ask me one day, "What is black metal?" I would sit them down and slide this CD across the desk to them.

I really hate the cliche, as it always implies some sense of superior/inferiority relationship, but this is one of those real cases where you either 'get it' or you don't, folks. If you do get it, congratulations. You have the eyes to see. The ears to hear. Your heart toils and bleeds black, and you will probably die a pitiful death, alone in a world of strangers that could not understand the dark pleasures you found discovered just below the surface of the night. This is the best black metal album that God ever turned his fat cheeks upon, spitting more filth than a thousand snakes in a thousand gardens, and drawing more messianic blood than a Roman legion of hammers, nails and crucifixes. This is where it begins and ends, choir. Every single black metal album must be judged against it, and thus far, none have exceeded its ghastly charms and molested dreams (and when they come close, they usually bear the name Darkthrone on their psychotic sleeves).

Highlights: every fucking second. And for fuck's sake, if you are not listening to this with the speakers or headphones cranked up, you are doing it wrong!