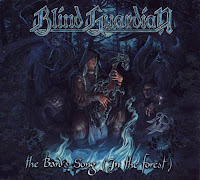 A CD single that begins and ends with perhaps my least favorite Blind Guardian track is not likely to evince much sympathy, especially when it is this much of a fucking ripoff. Yes, The Bard's Song (In the Forest) is nothing more than a studio rehash of the original from 1992's Somewhere Far Beyond, joined with three separate live performances of THE SAME SONG. Add to this a video performance of the same precise track from a Stuttgart live, and the fleecing is complete. This time I can say with honesty that I was not taken by these charlatans; instead my former roommate ordered the CDS and was so pissed off with the contents that he just gave it to me.

This new studio version of "The Bard's Song (In the Forest)" is indeed superior to the original, if mainly through the modern production values that are used to flesh out the acoustics, rendering it good and loud across your speakers. The lyrics are still dopey and self-referential, but even I will laud it as the superior version of the song found anywhere. As for the lives, there are only minor differences in the performances which certainly do not warrant their inclusion on the same release. For fuck's sake, can't we just leave this baited obsession to the bootleggers? Sure, the crowd may chant and clap at different volumes, after all it's three different countries (Milano, Madrid and Munich). The crowd actually does quite a lot of the performance, as usual. And "The Bard's Song (In the Forest)" is the point of their set in which the lighters and cheers come out and I go to the bar for another drink. Got a long drive home! As for the video...it's just another live performance.

You would have to be insane, or simply ignorant of the contents of this CDS to own it. If you fancy Hansi and the boys with a Teen Beat-level of passion, then I'm sure I could find this in among your private stash. As I always say, no one is forced at gunpoint to purchase this or anything from Blind Guardian (or any other band), but it's a total waste of product. As a tribute to just how needless this is, I will now take it outside and run it over with the car, before placing the remains in the recycle bin.