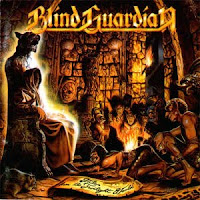 Coming off the blistering Follow the Blind, Tales from the Twilight World feels like the first album where Blind Guardian began to conceive of their epic direction, with an increased attention to the vocal arrangements. Certainly, the roots were already laid with the prior records, and in response, some of the speed metal antics do bleed through onto this and the following Somewhere Far Beyond. Surprisingly, this effort was not one of my paramount Blind Guardian experiences, as there are 1-2 songs which I rarely find the desire to re-visit. However, even when not writing at their best, these Germans still outclass many of their peers, and sure enough, Tales from the Twilight World has a half dozen (or more) tracks which should knock the socks off any Teutonic power metal fan.

"Traveler in Time" is a lengthy exposition to open the album, at 6:00 and commencing through a march-like arrangement with Hansi performing his vocals with operatic punctuation. The melodic, charging power/speed rhythms of Follow the Blind return, and once more the band exhibits a strength in the bridge of the song, as the solos crash across a slew of solid rhythms that veer into a brief acoustic mystique at 3:30 before soaring the leads soar back into the sky like eagles. "Welcome to Dying" is considered a classic by many, a staple of their setlists for decades to come, and deservedly so, with a forceful verse rhythm and a pretty predictable chorus, but it's not the best of this album. "Weird Dreams" is a spicy, wild little instrumental with some great guitar work and warped out effects, and "Lord of the Rings" is a great orchestral piece with synth and acoustics that highlights the band's fascination with Tolkien and foreshadows their future, and who could forget that vocal bridge?

"Goodbye My Friend" is a solid charger with some decent solo hooks and somewhat memorable (again, predictable chorus), though my favorite part here is the winding melody in the speed metal hook at about 2:25. "Lost in the Twilight Hall" is another of the fan favorites off this album, with good reason, it's catchy from the start with its arching melodies and superb vocals that immerse you in its world of glory and desperation, not to mention the vocal spot from Kai Hansen of Helloween/Gamma Ray (who had also appeared on the previous album). The Steven King inspired "Tommyknockers" makes a cool use of the rhyme rhythm from the story, interspersed with the charging, glorious speed/power metal you have come to expect and a damn fine solo bridge with toys through various rhythms.

"Altair 4" is a sort of sequel to "Tommyknockers", and while it's got some cool ideas, they feel a little too packed into the song's 2:27 minute length, and it simply does not sit in the stew long enough. "The Last Candle" is a self-referential track that opens with the familiar 'Guardian guardian guardian of the blind' repetition before a catchy dual melody. The track gets pretty intense from around 3:00-5:00, ultimately a great ending for the album. If you've got the Japanese version, you get a bonus live version of "Run for the Night" from the debut album. It sounds decent, but certainly not essential here.

Tales from the Twilight World is simply another great Blind Guardian album, even if it's not always gunning at 100%. Though I didn't enjoy it as much as Follow the Blind, the quality is close, and it feels like the band took even more liberties here to incorporate a wide array of lyrical subjects that focus on fantasy and science fiction. Most of the riffs are good, and the vocal performance is ample proof that Hansi Kursch is one of the most original and distinct frontmen in metal music. It holds up fairly well, and sets up the following album, which would be start of the 'Golden Age' of Blind Guardian (four amazing, consecutive albums).

Highlights: Lord of the Rings, Lost in the Twilight Hall, Tommyknockers, The Last Candle