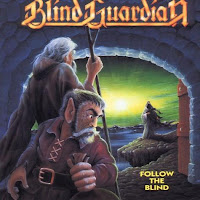 The fact that the follow-up to Battalions of Fear was not a huge hit when it released in 1989 is not a testament to any shortcoming of Blind Guardian, but a tribute to just how fucking amazing of a year that was for metal releases. This is a slightly superior offering to the debut, with a much tighter production and for the most part, some extremely catchy songwriting. Featuring the classic lineup and a guest vocal courtesy of Helloween's Kai Hansen, it's 38 minutes of fast paced fantasy metal ribaldry with roots in both thrash/speed and the formative power metal genre. The band themselves admits a huge appreciation for the heavy Bay Area thrash metal that was dominating the late 80s, and it manifests here nicely through the momentum of the guitars and explosive energy of all the better tracks, Hansi's edgy shouts and the 'gang' style backing vocals which rule.

"Inquisition" is merely a sampling of the monks from Monty Python & the Holy Grail, over which the drums and guitars fade in before "Banish from Sanctuary" erupts in a flurry of speed metal, solid chords and palm mutes adorned in melodic, weaving rhythms, and a great melodic vocal harmony after 1:00. The chorus is lovely and the leads and rapid synthesizer swells in the bridge are likewise fantastic. "Damned for All Time" does not break the forward thrust of the record, with a thrashing intro over Stauch's battering, a bristle of spastic leads and then a warlike verse rhythm. Again, the band fills the 5 minutes of the track with quality solos and an exciting middle section where some new riffs swerve into play. "Follow the Blind" itself is somewhat slower and more morose, with a series of power chords anchoring Hansi's chorus, only to part ways for a nicely winding melody as he escalates into the stratosphere. Not the most memorable tune on this album, but quite good.

"Hall of the King" features some intense, jerky thrashing which foreshadows a lot of the band's later, faster material from their 90s albums. The leads are again exciting though tucked further into the track than usual; dual melodies ascending into a great vocal hook and some fast keyboard strikes and chorals. "Fast to Madness" commences with a somber grace before the pummeling thrash/speed returns to some excellent riffs akin to early Scanner or Gamma Ray. The instrumental "Beyond the Ice" is incredible as it swarms through a wonderful exchange of leads and glorious melodies, all toppings for the speed metal surge beneath. "Vahalla" needs no introduction, it is the most enduring track on this album as far as the band's live choices, a straightforward, barreling number serving as a suitable tribute to the great and glorious Norse afterlife. Kai Hansen's vocals cut right in like a knife through gelatin, at first taking you off guard until the blessed scream over the guitar melody.

The rest of the album consists of cover songs...i.e., the fairly lame medley of the Beach Boys' "Barbara Ann/Long Tall Sally" which sticks out sorely like a tumescent, cancerous penis from the album's prior, healthy rock-hard abs. I've already gone over it before...the track isn't necessarily 'bad' from a musical standpoint, but it serves no purpose other than to show the listener: "Hey guys, we can take ourselves not too seriously and look at all the great old music we like!" If you've got the Japanese version of the album, you are treated to a far superior cover, that of Demon's "Don't Break the Circle", which is one of the best covers I've heard them do...and in retrospect would have been a far wiser choice to include with the early non-Japanese editions of Follow the Blind. But them damn Japanese, always paying for that added bonus. The rest of us: screwed.

Despite the unnecessary Beach Boys' tribute, Follow the Blind is quite a good album. I am convinced by this that, had Blind Guardian continued forward in a more traditional, fast paced approach they could have produced some masterpieces. And to an extent, they did, as the better tracks of Tales from the Twilight World and Somewhere Far Beyond continue in this fashion, to give way later on for the band's more progressive, multi-tracking efforts. Not that the band ever ceased their focus on quality, mind you, but I would be enthralled to hear the Germans release an album more in this style for the coming decade, using all the tricks they have learned, instead of dallying on another Twist in the Myth. At any rate, this is a crucial release which further spread the buzz of the one of the future's most popular metal bands, and recommended to not only the Blind Guardian initiate but other fans of European power/speed metal ala Rage, Scanner, Running Wild, Gamma Ray, Mania, and so forth.

Highlights: Banish from Sanctuary, Damned for All Time, Hall of the King, Beyond the Ice, Valhalla