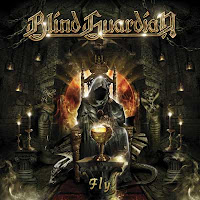 Fly is another of Blind Guardian's many singles, dropped far in advance of the release of its corresponding LP (A Twist in the Myth), and perhaps wisely, as it was the first real buzz about the band since their Live album and Through the Looking Glass DVD, the first new material in years. While the album was not due until September of 2006, this single came out in February, so the fans were left to simmer in its glories for a little over six months, though other teasers were offered online before the fateful full-length. Like most CD singles, Fly features both album and non-album material, three tracks in total in under 13 minutes.

"Fly" is one of the catchier songs from A Twist in the Myth, a tribute to Peter Pan. Granted, this is based more on the film Finding Neverland and it's message of believing in one's abilities; but still, something about the thought of Pete's tights and Tinkerbell in the hands of a German power metal band has my heart bursting with awkward, nervous laughter. The song itself is quite good, carefully developing its momentum with an inspirational chorus that more than honors its source material, and if you can close your eyes and imagine this track is about something else...anything else, then you'll probably dig it. Though the material doesn't fall far from A Night at the Opera, you can already hear hints at an even more accessible Blind Guardian, with a hard rocking vibe right down the center (which coincidentally would be carried forward to their next single).

The single also contains an acoustic version of "Skalds and Shadows". The album version features a more powerful chorus, but otherwise this doesn't differ greatly. The lyrics here once again feel rather self-referential to the whole bard culture that Blind Guardian propagates, but when someone utters the word 'skald' I simply perk up. The track reminds me a lot of "The Bard's Song (In the Shadows)", which I didn't like, so you can imagine this one runs straight through me like cranberry juice through a kidney. The last track of the three is a cover of Iron Butterfly's "In a Gadda Da Vida", which has already seen a treatment via Slayer and just about every blues or cover rock band across seven continents. I can't say that Blind Guardian's version offers me much to come back for, but at least they transform it into an epic composition that suits their style.

As for the value of the Fly single, there is simply little left now that A Twist in the Myth has been out forever. The Iron Butterfly track is the only reason one might spin this, as the "Skalds and Shadows" version here simply doesn't live up to that of the album.