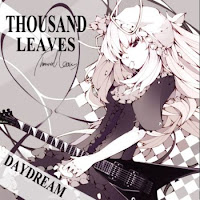 Thousand Leaves are another of those Japanese acts cropping up in recent years who perform instrumental power/shred metal based in all the fine traditions of Yngwie Malmsteen and about a thousand other influences hearkening back to the 70s and 80s (perhaps the best known would be Iron Attack), when the guitar itself was god, and the riff was only the vehicle to create a suitable atmosphere for the solo and melodies. They also adorn their album covers with pictures of cute anime lolita girls, almost clip art (perhaps rejecting from a manga, perhaps not) usually wielding a guitar, and while it may seem unprofessional and tiresome, to me it's a case of 'so where have you been my entire life?'. Like Iron Attack, Thousand Leaves is somewhat prolific, having released four albums this year already...

The thing that strikes me is just how good these guys are at writing the sort of instrumental shred metal that was so prevalent in the 80s on the Shrapnel roster, etc, and injecting it with that urban 80s cheese feel of Japanese anime like Bubblegum Crisis and the like. So you can imagine it is heaven for the autothrall, and heaven it is, as I enjoyed just about every track on this, from the Dragonforce-frenzy of "I Speed at Night Story" to the fighting game/shmup power of "Skies and Dreams", to the jamming, moody "Super Mon-Petit" with its ripping urban nightstalker blues, and back to the super shredding meets pretty piano of "Necromancy". I also really loved the very video game feeling of "Musica Fantasma", with its synthesizer violins and native Japanese, quirky feel. "Scar of the Dark" features vocals and a guest from Iron Attack.

I really admire the creativity of an artist like Thousand Leaves, which affirms the long Japanese tradition of taking honest influences, as diverse as they may seem, mashing them together, and then making them work, even if only for the few gaijin dreamers like myself who actually get it. If you've ever wanted to hear an amalgam of 80s guitar shred, power metal, VGM, anime tunes and pop, you've come to the right place.