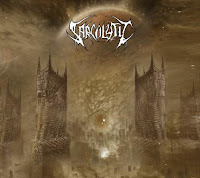 Sarcolytic is yet another new USDM band to come out of left field and impress me, and with a deal through Unique Leader records, this album should see some play in the hands of the proper underground segment who thirst for more technical death metal that expands upon the roots laid by Deicide, Morbid Angel, Vader, Immolation, Nile, Suffocation, and perhaps a little slice of Behemoth or Krisiun. Thee Arcane Progeny is a good debut, following up a little known EP from 2005. It's not mind blowing good, and in truth the band does not exactly write the most infectious of riffs, but it's the pacing and atmosphere of this album that make it interesting. There has been a pretty potent wave of similar acts lately, and I'd certainly recommend this to fans of The Faceless, Abysmal Dawn, Lost Soul, and Fleshgod Apocalypse, though Sarcolytic do not sound entirely like any of these bands.

The members here are no spring chickens, they've appeared previously in other bludgeoning death metal acts like Disgorge, Cinerary, and statesmen Images of Violence, none of whom are huge bands, but possessive of enough pedigree that they know how to write a death metal record and make it sound and feel as you've just been cast into a nether realm of elder gods, forbidden and forgotten magics, and a giant consuming black hole which eventually consumes all matter, life and dreams. I can't claim to have grown tired through the 38 minutes, for even if the band isn't pulling off some hook to drag you deeper into their nightmarish visions, their playing ability and tempo shifting is rarely less than engrossing.

Dark and briefly grating tones introduce the title track, with its acrobatic guitars and level grunting that storm through a half dozen riffs before you've even blinked an eye, and 0nce through being pulverized you'll come to the realization that there is enough in this song alone to provoke a string of listens, just to decipher the band's rabid chaos. A few similar, destructive numbers include "Exalted Gift of the Abzu", "The Secrets of Divinities" and "Scribe of Celestial Omen", but there are also some songs which far outweigh these in quality. "Manus Obscurus" has a stunning blast of catchy, shifting rhythms that alternate into a discordant, depressive atmosphere and then a kickass, almost melodic breakdown, alongside the dual grunt/snarl vocal patterns of John Zig. "Emissary" is another fantastic track, with walls of descending rhythms broken up by a choppiness that could only be apprenticed from some Lovecraftian butcher block. "The Seed of All Beginnings" also has some barbaric picking and mental pit onslaught.

If you're the type of guy who doesn't wince from the more technical and relentless edge of death metal, but prefers that the bands don't become too showy or indulgent, then the debut of Sarcolytic is straight up your primordial alley. This isn't the catchiest death metal album of late, but it's so tightly executed with dark passion that it is almost impossible not to notice. Texas death metal is in good hands here, even if those hands might be tentacles from a rip in reality that wishes to consume you and consign you to oblivion.