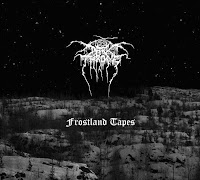 Apart from the band's albums, there is only one mandatory purchase in the Darkthrone discography, and that is 2008's Frostland Tapes, a reproduction of the band's first four demos in their original form, plus a wealth of other material. For years, you had to trade these demos over the web, before that simply tape swapping, but it's excellent to finally have them all in one swank package. And it's a far superior product to the Prepare for War compilation, with the exception of the DVD included in that. Had Fenriz and company simply included that DVD with the Frostland Tapes, and perhaps some of their EP/single 'b-sides' and covers, you would have the perfect bargain, the complete fan collection. Alas, this is at least good enough on its own.

Disc 1 takes it from the top with the title track of the 1988 Land of Frost demo, a rugged and barbaric tune with some elements of death and doom, so disgusting with its echoing vocals, sludgy chords and fuzzy, inept melodies that it seems like some psychedelic house band of fallen angels covering their master's favorite Hellhammer, after listening to too much Iron Butterfly. "Winds of Triton" is another bludgeon of punkish death metal, complete with bombing bass and chords that feel somewhat out of tune. "Forest of Darkness" reminds me of the Riverbottom Nightmare Band from Emmett Otter's Jugband Christmas, it's so raunchy and slamming brutal simplicity. This first demo is rounded out by the sludge and despair of "Odyssey of Freedom" and the chugging march "Day of the Dead". A New Dimension is simply a sampled intro piece ("Twilight Dimension") which runs into the 9 minute instrumental rehearsal "Snowfall", and then it's on to the Thulcandra demo (1989) with its three tracks "Eon", "Thulcandra" and "Archipelago", each of which displays a steady progression from the cruder material on the early demos and the writing that would dominate their debut Soulside Journey. The first closes with the primal, vile "Soria Moria", which picks up into a pretty intense speed for Darkthrone.

Disc 2 continues with the entirety of the Cromlech demo, which is once again a step forward in the band's sound, very close to the debut in menace and attitude, and retaining the Hellhammer influence, though more underground death from Europe and the US is creeping into the sound (some Death, Slayer, Possessed, and so forth). "The Watchtower" is a deep, dark grinder, and "Accumulation of Generalization" and "Sempiternal Past/Presence View Sepulchrality" remind me quite a lot of something from Scream Bloody Gore. After the end of the fourth demo, "Iconoclasm Sweeps Cappadocia", we are treated to some rare live tape from Denmark in 1990, with the band playing a lot of material from their demos/debut: "Cromlech", "Sunrise Over Locus Mortis", "Soulside Journey", "Accumulization of Generalization", "Sempiternal Past/Presence View Sepulchrality", "Iconoclasm Sweeps Cappadocia", and the end being "Neptune Towers". This set actually sounds quite good, reverbrous vocals and a good raw burn to the distortion, and if you were there, well, let's just say you were lucky.

Disc 3 is yet another huge bonus, as it features the entire instrumental set of the band's scrapped 2nd album, which later was released as Goatlord in 1996 with the added vocals. I will take a pass on reviewing this here track by track, as I'd prefer to review the finished version, but it's quite cool to hear where the band would have been headed had they not chosen a different path through the darkness. I am of course referring to the fact that with their 2nd album, they transformed into one of the first and most formative acts in the genre we now know fluently as black metal. So this must come with a warning: if you are expecting Darkthrone the black metal band, and don't care for the style of their debut album, you probably don't need this release, since the material is largely confined to their original style, and extremely crude even by the late 80s standard of death metal.

I really enjoyed this package, as it meant I could scratch all those copied versions of the demos that I'd had kicking around, but it's certainly far from what they are writing today in terms of the lyrics and the riffing. If you're a completist, or a fan of Soulside Journey, then it's well worth the money.