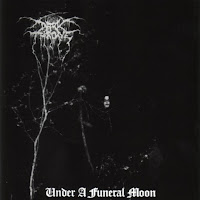 From the look of the cover art alone, Under a Funeral Moon would appear to be a redundancy after the game changing sophomore effort A Blaze in the Northern Sky, but skim below the surface imagery into the music itself, and you will find that there is a subtle transfer here from that more heavily Celtic Frost-influenced album into a fuzzed out wall of high-speed riffing. Other slight differences are that Culto uses a higher pitched snarl than his dark barking of the previous album, and bassist Dag Nilsen had left the band after recording his tracks for A Blaze, thus those duties are handled here by N.C. Furthermore, this was the final Darkthrone album to involve Zephyrous on the guitar (assuming you don't include the later release of Goatlord), so it also marks the end of an era, after which the band would consolidate into the duo we have come to recognize for more than a decade hence.

"Natassja in Eternal Sleep" initiates the album on somewhat of a somber note, a stream of excellent, quirky, jangling guitar notes ring off into a stellar nightscape, picking up steam before the minute mark to a depressive string of chords above which Nocturno's vocals appear as hammering apparitions, frozen into the sky after each syllable parts. The track really alternates between these two riffs, a bass steadily plodding below, and it seems to end rather abruptly before the thrusting abysmal bliss of "Summer of the Diabolical Holocaust" rages forth. This song is perhaps one of the best of the album, an unapologetic onslaught that sacrifices nothing in its momentum, a primal channeling of energy and despair, which journeys through a series of hooks that are both barbaric and introspective, before settling into a slow, crashing rhythm more akin to much of the material on the prior album. "The Dance of Eternal Shadows" continues this pattern, with a dominant, trudging opening riff which sounds like any band could write it in 30 seconds, and yet in the hands of Darkthrone, it seems like an otherworldly revelation, before the pace is increased with barrage of sombering chords much like the first two tracks.

"Unholy Black Metal" erupts immediately with a pair of repetitive chords that transform into a hammering change-up rhythm before the eventual shift into another, extremly simple riff, glazed in wailing, sporadic lead guitar abandon for a few seconds, before cycling back through the first two sections. Once again, this is the type of track that any musicians with amps and a drum kit could probably write in the blink of an eye, yet the adherence to the basics has never hurt Darkthrone. In their capable imaginations (and hands), they mutate shit into diamonds and the very atmosphere of the damned thing more than compensates for any lack of technicality. "To Walk the Infernal Fields" moves at a pensive crawl, with more of the band's obvious worship of Celtic Frost and Bathory, but there are delights awaiting within, like the war metal rhythm march at 3:30 and the further deceleration into a grim miasma of chords and rumbling noise that stretches across the blackness of the heavens.

The title track is another of the album's strongest, though there is hardly a track I would call 'weak'. Starts off simply enough, with more of the band's pummeling mid-paced lock-step rhythm, but becomes more distinct at :40 when it shifts tracks into a penetrating, vile speed lick like something Slayer might conceive when drunk. There is also a killer, muddy doom bridge, huge chords churning below the stagnant waters while a noisy lead erupts like a swarm of mosquitos, Nocturno crashing forward with his howls of pain. "Inn I De Dype Skogers Favn" spends almost 2 minutes grinding out the same, almost too simplistic rhythm, before a shift into another riff that you feel you've already heard on the album several times. I would never call the song bad, but its clearly the worst of the lot here and the prime reason I don't count this as flawless as its closest siblings. Thankfully, the closing track "Crossing the Triangle of Flames" comes around full circle to excellence, with big hooks that cavort through the escalating emptiness of widening ichor that Zephyrous and N.C. create through their callous riffing. The charging riff around :50 is the kind of brilliant, primal beauty this band has written the book on, and the turbulent, doomed nightmare later in the song sounds like drowning in quicksand, grasping for that last branch just beyond your reach, before the final tolling bells.

Trying to choose favorites among the vaunted pantheon of Darkthrone albums is simply a matter of apples and oranges, and I tend towards those that struck me the most when they first arrived. A Blaze in the Northern Sky had the advantage of taking me completely by surprise, and I worship each of its six tracks wherever I can find privacy, sanctum and sacrificial implements. Under a Funeral Moon did not have the same impact simply because I was expecting it, and I don't feel the raw strength of the band holds up quite as strongly through the entire playtime. "Inn I De Dype Skogers Favn" lags behind the rest just enough that I wish it had another riff in there to really round out the sum. As far as influence, this was certainly just as important as A Blaze or Transilvanian Hunger, and several other Darkthrone fans I know venerate this above all, and I cannot fault them for it. Certainly Under a Funeral Moon is essential listening for the Norse black metal fan, and really, ANY black metal fan should probably have a copy of this on hand in their vinyl bins or CD rack.

Highlights: Natassja in Eternal Sleep, Summer of the Diabolical Holocaust, Under a Funeral Moon, To Walk the Infernal Fields, Crossing the Triangle of Flames