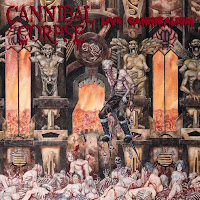 Whilst many artists blow their live load early, in order to scrape together as much extra cash as they can from their fans, or fill out a label contract when the new, original material is not forthcoming, Cannibal Corpse actually had the decency to wait over a decade and seven albums before offering their own. Recorded during two Midwest US gigs in the good ol' Y2K (at the Emerson Theater in Indianapolis and the Rave in Milwaukee), Live Cannibalism features over an hour of music across 18 tracks that mines their entire backlog for material. This is a superb soundboard recording, and listening to it only increases my appreciation for this band and their songwriting, because this is quite a lot to pull off live as accurately as they do here. Having seen the band live on at least a half dozen occasions, I can attest to the generally tight setlist and the band's demand for a good sound.

As far as the tracklist, it's fairly comprehensive and includes most of the band's more popular work up to this point. This is not 100% pleasing to my ears, since a lot of my favorite tunes from the earlier efforts do not coincide with the fanbase at large, nor the band themselves. Here we get "A Skull Full of Maggots" from the Eaten Back to Life debut; "Meat Hook Sodomy", "Gutted", and "Covered With Sores" from Butchered at Birth; all of which sound a little brighter and better than on their source albums, which I find pretty average. Tomb of the Mutilated is represented rather weakly with the staple "Hammer Smashed Face" and "I Cum Blood" (so many better songs that didn't make it), and The Bleeding with the expected "Staring Through the Eyes of the Dead", "Fucked with a Knife" and "Stripped, Raped and Strangled". Vile gets "Devoured by Vermin" and "Perverse Suffering", again not the better songs from that album. But most important to me are the selections from their more recent records at the time of this live's release. Gallery of Suicide is represented through its title track, "Disposal of the Body" and "I Will Kill You", though surprisingly no "Sentenced to Burn". These tracks all sound great, as do the masterful Bloodthirst proxies "Unleashing the Bloodthirsty", "Blowtorch Slaughter", "The Spine Splitter" and the staggering "Dead Human Collection".

There's not a whole lot of impetus to listen to much of Live Cannibalism over the studio versions, with the exception of the staples from the first two albums which sound far more brazen and fit in well with the more recent material. Most of these tracks are featured in almost every set list the band performs, which is almost sad, when you consider all the great material they have floundering away on those middle albums. The sound is right, and if you don't have the opportunity to see them on stage, it's the next best thing if you actually feel the need to spend money on it. As far as banter between tracks, there is not a lot here, and George is usually more fun in person. If you should see him, tell him he needs to roll a gnome. Live Cannibalism is not one of the better live albums I own, but it's decent enough to pick up at a bargain rate. If you seek more than just the audio component, there was also a VHS release of the live performances which seems more or less like any show I've seen them at.