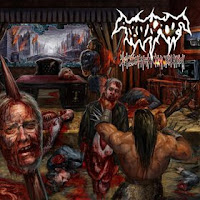 Another squadron of unflinching brutality has emerged from the NYDM scene, performing a brand of slamming death with an old school polish, existing somewhere between the contemporary sounds of Skinless and Internal Bleeding and the thunder of older Bolt Thrower, Sepultura and Benediction. Abdicate is a fairly young band, having formed only in 2008, but their debut already has enough seasoning to kickstart mosh pits at nearly any gig, certainly here in the States. Ambitious this is not, but what separates Abdicate from a lot of their peers is that they don't delve too deeply into the raw gore lyrical themes (despite the cover art), instead focusing on tales of revenge, nihilism and dystopian breakdown.

This is not the sort of record you'd listen to when seeking out intricacy in your death metal, instead it's sound is that of a slab of cow being slammed on the stone slab and carved into thick chunks while you headbang along and break out your best windmills into the faces of others. "The Burden of Existence" chugs and then blasts through a set of face-to-concrete rhythms as the singer, aptly known as 'Yeti', grunts his guttural chestbeating. I personally enjoyed the riffs of the next two tracks "Entangled in Darkness" and "Divine Redemption" for their Cannibal Corpse-like rhythms, and "Path to Anguish for the total wall of oldschool evil that erupts in a thrashing hostility. "Godless Vengeance" is a choppy thrust of chug/blast alternation that should please the Suffocation sect, and there are a few other thundering neck-snappers like "Relinquish the Throne", "Forged in Ruin" and "Beckoning Death".

Some of the more primal and familiar riffs on this album wouldn't have the same impact without the great production work here. Abdicate make their intentions loud and clear, with a crushing guitar tone that manages both the low end chugging and rampant death rhythms. The vocals have just the right muscle to catapult above the grinding riffs, and you really feel as if you've been bruised and punished once the 30 minutes of the album end. That's right, it's perfect for that half an hour drive to work on a day you plan on being very, very angry. Now, don't go doing anything I wouldn't do!