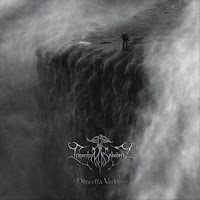 Having been a huge fan of their previous album Dämmerung der Szenarien from 2007, I've been eagerly counting away the days for this third full-length to arrive from one of the more promising German black metal acts. Perhaps I set my expectations a little on the high end, for Procella Vadens does not quite achieve that same level of intense appreciation I found in its predecessor. Having said that, it's still a strong and somber album with a propensity for slower, pensive tracks that follow one glorious, hymnal melody after the next, with a good balance of both its tranquil tides and lamenting, blazing axe rhythms. It just occasionally lapses into a dull moment for which you can only pray that the next will compensate. Fortunately...this is often the case.

"Die Hoffnung Stirbt..." is a fine piano piece, mysterious and dark as the samples of crashing waters shimmer and boil across its surface, before the slowy driving melodies of "Lacrimae Mundi" crash forth under Horaz' snarling. This is an attractive enough piece, with a trailing acoustic climax, but it doesn't resound with anything all that memorable. "A Million Moons" features a stronger central riff, still very simple and still trolling along at the standard pace, but there is a great bite to the rhythm riff that counters the more melodic guitar, and the breakdown with the oozing bass at 8 minutes is interesting, if a little dull. And that's really the issue, is there enough in this song to entertain you for 10+ minutes? I'm afraid the answer is no, 2-3 could have been cut from its length and nothing lost in the transitions. The following track, "Ego Universalis" is stronger still and half the length, and "À La Nuit Tombante" is a wonderful folksy acoustic piece which slowly escalates into a simmering swell of autumn beauty.

Speaking of the fall, the latter half of the album begins with "An Autumn Serenade", pianos morphing into more primal, mid-paced thunder before the glinting acoustics, lightly howling winds and distant male vocal narrative take over. Though it's also pretty long, over 9 minutes, this one never suffers from some of the repetitious drivel that drags down "A Million Moons", and it's one of the album's best. "Ocean, Mountains Mirror" is a solid, regal slab of melodic black metal, while "The Descent Into Hades" is like a marriage of Vangelis and Dead Can Dance, a fascinating and lustrous trip into a non-metal atmosphere which meets with resounding success. Loved this one, and the title track isn't too shabby, a powerful, emotional black metal piece with room to breathe, before the album closes as it began, with another swelling piano piece "...Wenn Der Sturm Beginnt".

Though it's short of an hour's length, there are some areas of Procella Vadens which feel too bloated, in particular the 10 minutes of melancholy that comprise "A Million Moons". Much of its contents are good, though, in particular the moody, non-metal moments, whether they serve as intros, segues or tracks unto themselves. I feel the band can often suffer from a lack of riffing, and their minimal approach (at least on this album) does not always compensate. With a few tweaks, it may have reached the level of its elder sibling, but I was mildly underwhelmed by the end result.