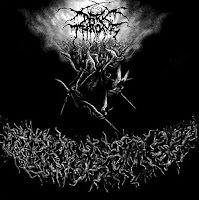 Sardonic Wrath is the 11th album from Norway's beloved bastards, an extremely strong showing which bridges the morbid taint of the prior Hate Them with a blast from the past, namely a return to the overall sonic aesthetics of the 'unholy trinity' which brought them into prominence (A Blaze in the Northern Sky, Under a Funeral Moon, and Transilvanian Hunger). It is astonishing to me that a band remains so strong so late in their career...think of how many other black metal artists, or metal artists in general, that you listen to, and how solid they were by the 11th album? Most have fizzled out by that point or gone in some direction to polarize their fan base, 'selling out' or whatever hogwash terminology is being used to sate the stubborn feelings of alienation fans can feel when they are no longer the 'only' fans.

Darkthrone have faced such prosecution, and survived, but Sardonic Wrath is the type of album that probably recalled a lot of the fans that left them on Ravishing Grimness, safely nestled in with their earlier sounds, but not ignorant of the minor progressions they have made with each album starting at Panzerfaust. That said, this safety net is just about the only complaint I can make for this album, because truth be told it is phenomenal, thick as thieves with classic Culto riffing and interesting lyrics that see Darkthrone in their transition towards the more bitter political and social criticism that lit the punk fire under their asses in recent years.

"Order of the Ominous" is a drawn out dark ambient void, which unlike the intro to Hate Them, is a track until itself. Distortion buzzes off in the background over swelling black noise, with no warmth or melody, and it is this aesthetic which breeds throughout the metal tracks. "Information Wants to Be Syndicated" is a cold blast of holocaust, the vocals almost lazily placed at the back end of the measures, floating off into the sick violence of the break at about :30. The breakdown in the track is surefire, slow and heavy, not far off from much of the drone and sludge that was breaking out in popularity at the time. "Sjakk Matt Jesu Krist (Checkmate Jesus Christ)" brings in the raving lunacy of the band's Hellhammer leanings, with a raw vitriol enforced through the harsh lyrical winds and the pumping bass distortion.

"Straightening Sharks in Heaven" is yet another interestingly titled track, with a bright, rolling bridge that seems like something Voivod, until it rings out into the glorious third rhythm, evoking that Bathory-on-a-dobby-horse motif the band have often used in the past. "Alle Gegen Alle (All Against All)" is dark and dank, like a pissed off alcoholic spraypainting his own blood, vomit and urine all over a sewer wall, not expecting to see the next day. It's primal and utterly simplistic, with extremely subtle hooks delivered only through the rhythmic crashing, but the meathook delivery of the bridge before 2:00 is worth listening for alone. "Man Tenker Sitt (My Thoughts Sit)" brings forward a little of the band's death metal influence, but the verses broil in a Bathory-like stew with a hefty diabolical impact.

So invokes Nocturno Culto in "Sacrificing to the God of Doubt", one of the more melodic tracks on the album, with a great sheen to the chords that feels like skirting a post-industrial wasteland of nihilistic thought. At the 90 second line, the band lurches into a total Norse crawl, complete with marrow-draining minor chords and plodding bass. "Hate is the Law" is like a Transilvanian Hunger track without the screaming mountainside melodies, just a grinding abyss of hostility, a bowel movement for the Father of Lies, but the chorus riff is staggeringly punk as fuck and one of the best on this whole album. "Rawness Obsolete" returns to the crawl the band started with "Sacrificing to the God of Doubt", with a more fleshed out rhythm, and a powerful, ominous crushing atmosphere, before ceding to an even further doomed segment. It's solid 'Throne, but I will admit to getting a little dulled by the rhythm after a spell, and it's likely the least interesting thing you'll discover on this.

I'll admit, a little of my fire for Sardonic Wrath has died down in the six years since its release, a little rust flaked away from the morbid engines of my obsession. It's a fantastic album that I would gladly listen to over about 95% of other black metal releases, but not one of the band's very best when glimpsing back through their career. However, I think it's one of their rare efforts where fans of various eras can come together and find something in common, since it seems to sit dead center in the pantheon.