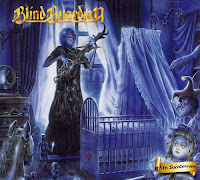 Mr. Sandman is yet another CD maxi single that was pretty big on the import scene when it arrived, which I also regretfully purchased sight unseen in hopes there would be some new material of note. Unfortunately, most of this release is now redundant if you own other, better, compressed collections of the band's rarities, and it is very hard to recommend unless you are of course someone who cannot live without owning every piece of product ever issued from the artist (in which case, good luck).

"Mr. Sandman" itself is a cover of The Chordettes classic penned by Pat Ballard in the 50s, and though Blind Guardian don't make a mess of it, it's the type of novelty you might listen to once or twice while you slurp your ice cream cone and then never really care about again. There is an 'edit' of "Bright Eyes" here which is completely worthless unless you run a college radio station and need to save a minute of airtime. Strangely enough, this single was released under the Bright Eyes title in Japan with a different tracklist. "Hallelujah" was at one point unique to this release, and probably the best thing here, a more rock & roll take on the typical Blind Guardian track. The remainder of the single consists of demo version of "Imaginations from the Other Side" and "The Script for My Requiem", neither of which impresses me more than the final version of the Imaginations album.

It's not as if anyone was ever held at gunpoint to buy this single in the first place; but considering that the two unique tracks "Mr. Sandman" and "Hallelujah" could be found later on The Forgotten Tales compilation (the latter only on the 2007 remaster/re-issue) alongside other oddities and covers, I find it hard to recommend to anyone without money to burn. And if you do have money to burn, I'm taking donations!