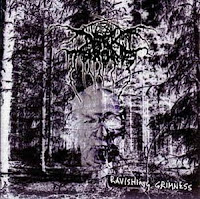 After releasing an album each year from 1991-1996, it was inevitable that Darkthrone might face some sort of burnout...I mean, really, how can a band remain that good for that long? The answer is that they were going to remain great for a LOT fucking longer. To date, almost 20 years post-Soulside Journey, there has still never been a subpar Darkthrone album... If the band should decide to take a small hiatus for a few years while they eke out the material for their next opus, so be it. Hell, most good bands require at least 3 years between their releases...and Hank Amarillo & co. had just given us 6 straight... including their genre-defining work like A Blaze in the Northern Sky, Under a Funeral Moon, and Transilvanian Hunger.

In March of 1999, the new album arrived, with a strange album cover unlike any the band had used previously (though the woods were nothing new). And let me say this: it was worth every month of anticipation since the re-release of the Goatlord material. This is a new Darkthrone, but it's also the old Darkthrone, given a vibrant, crashing production with a killer guitar tone that rings of hollowed out trees. I've heard a great many gripes about this record and its follow-up Plaguewielder, that the band had gone all out 'black'n'roll' or that they had sold out, but I'd like to dismiss such claims as tripe and horseshit. The riffs here follow the same familiar patterns they've used on most of their albums starting with A Blaze in the Northern Sky, it is simply the production of Ravishing Grimness which has shifted. In fact, this is the strongest material the band had offered since Transilvanian Hunger, wisely kept to a neat length of 37 minutes for six tracks, with no filler and no fat to trim. The duo's duties here remained unchanged from Total Death, with Fenriz rocking the kit and Nocturno Culto handling the bass, guitars and vocals once more. Talking about overworked!

Some Darkthrone albums have traditionally possessed a few layers of penetration before I could come to fully revel in their nuances, but not the case with Ravishing Grimness, and I took to it immediately as the feedback and whip-click herald the writhing power of "Lifeless", with its cutting chords that hiss off into the darkness as the edges, before the sick bridge rhythm at :45. After another minute, the track cuts into an even simpler riff of pure old Hellhammer worship, though I had yet to hear such a rhythm with the brighter guitar tone used on this album. "The Beast" has another of those simplistic, proto-black/punk rhythms that had gotten the band where it was by this point; equal parts Hellhammer, Bathory and Discharge, with only subtle changes in pattern much like an old rockabilly or blues number might pursue, before the inevitable collapse into a bludgeoning groove bridge. After this, the next three tracks pick up to over 7 minutes in length, beginning with the pondering of "The Claws of Time", in which a searing and melodic melody is anchored by Culto's raw throat, switching off into an even more subtle and beautiful rhythm. If I didn't know any better, I would almost say this was the first 'happy' sounding song from Darkthrone (perhaps it's the real reason so many stubborn cockslugs suddenly felt the band had 'sold them out', and refuse to acknowledge their body of work post-Total Death). But this airy warmth is fused with a sadness, and before long a cruising, majestic riff embarks like an ocean liner en route to an iceberg.

Trapped in the claws of time
Bone hard death-sane
Necrohatred by angels
Beneath the crust, shredding moans

"Across the Vacuum" spans a terrain somewhere in between "The Beast" and "The Claws of Time". It has that punk heart fueling its engine, but manifests in long passages of slashing chords that emulate the rise and fall of a meat cleaver, before the 1:30 point at which the song starts to channel a more sinister cousin to their Transilvanian Hunger days. There's also a pretty powerful breakdown in the track with a dash of Satyricon or Bathory. "Ravishing Grimness" itself is the tune which stands out the most to me, a series of phenomenal riffs that manage to resonate through the simple ringing out of the higher tone in the chords, like a rush of cold water down a desolate fjord. The steady repetition of this passage eventually descends into a slower, fist-clenching rhythm alongside the low-riding ring of a bell (I assume), and then an uplifting, almost Viking concoction of driving chords which remind me of an Immortal breakdown. "To the Death (Under the King)" finishes off the album, with an early Slayer-styled riff blown into thundering chords over the steady shuffle of Fenriz' footwork, eventually rushing into an even faster charge.

Ravishing Grimness is an entirely level album, and though I dread to say it, probably the 'safest' they had released in the 90s. However, it is very much classic Darkthrone, and the rather reined in vibe of the compositions can hardly be faulted when the album sounds so good. This is not at the level of re-invention that some of their later efforts would pursue, it's just the basics re-organized with a new studio sound and a slightly more mellow set of lyrics (though they haven't lost all their edge, just read "Ravishing Grimness"). It gets a little unjust treatment due to its minor shift in tone, but I have confidence it's the type of album people will listen back on, and then kindly slap themselves in the head for having not appreciated it before.