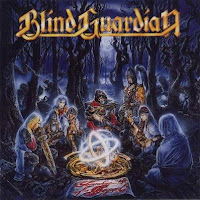 Up to this point Blind Guardian had merely been a good band with a ton of promise...but it would be Somewhere Far Beyond that would vault them into something far more, and initiate a string of releases that showcase an epoch of creativity that transformed them into a reliable, go-to, must buy type of artist. This album is a seamless hybrid of tranquil, folksy moments and explosive, inspirational speed and power that nearly steals the breath away, and aside from the first of the "The Bard's Song" tracks (which others seem to laud, but I find a little dopey), it's a flawless exercise in songwriting, nicely rounding out the force of Follow the Blind with an increased wealth of vocal hooks and ballistic balladry.

It was the third consecutive album with a 'Time' track, in this case "Time What is Time" which christens the album with some graceful acoustics, perfect for a spell by the river (of water, or time...), which escalate into the dominant chords, then the thrashing outbreak, and the surge of the chorus, with Hansi hitting some higher vocals that truly cultivate the dirty soils of his throat. This is a great song, but very few tracks in the Blind Guardian discography can compete with the following "Journey Through the Dark", an eruption of speed metal emotion so powerful that it has drawn tears from me on more than one occasion. The flighty opening riffs are complex and wonderfully written, melodic speed metal, while the verse is like a bristling of spears and arrows straight to the heart, Hansi going wild as he screams through the melodies. The chorus is a climax over but three perfect chords, and once the track hits about 1:30, you are about to experience some of the most emotionally jerking moments in metal, with the pretty vocal breakdown over the guitar melody, the successive, thrusting eruption and subsequent return to the chorus. But the fun isn't over yet, for this track has some of the best solos of Blind Guardian's career, performed in a sauteed Helloween/Judas Priest style. Holy shit!

Frozen memories laughing
They don't let me find the truth

Yeah, there's pretty much nothing that can top this. But that doesn't mean the Germans are about to let their album trail off. Allowing you to compose yourself, they next hit you with the Queen-like, brief rock operetta "Black Chamber" and then the orchestral "Theatre of Pain", which soars through some great leads as it morphs into its trudging, beautiful verse, Hansi twisting a deep, solemn gothic tone in among his normal growling melodic bite. "The Quest for Tanelorn" is a wonderful tribute to Michael Moorcock's Elric series, though Hansi's low resonance in the word 'Tanelorn' might seem slightly dorky. The track has a great 70s feel to the leads that really conjures up the mental imagery of the original books, and the chorus is once again similar to something Queen might perform.

"Ashes to Ashes" brings back the hard rocking from earlier in the album, another surge of melodic, post-thrash speed with more of the soaring leads and vocals that few other bands can pull off with such aplomb. After this the album takes a slight nosedive with the first half of "The Bard's Song - In the Forest", and I say slight because it just feels a little corny to me, as I picture men in tights lilting about a woodland as they court satyrs and dryads (depending on their preference). It sounds like a minstrel's song, surely, but I don't like the self-referential title and lyrics...even if the acoustic guitars are decent. The second half, "The Bard's Song - The Hobbit", is a folksy metal anthem that trudges along at a majestic pace, with a catchy guitar melody weaving over the chords. There would be many folk metal bands later (of the Northern, woodland or Viking variety) who simply copy this song over and over.

"The Piper's Calling" is a resonant bagpipe track, under a minute, that sets up the album's original closer, title track "Somewhere Far Beyond", an excellent scorcher that continues the path set by "Journey Through the Dark" and "Ashes to Ashes". 7 minutes 30 seconds of raging guitar rhythms and powerful vocals later, you know you've just had a serious face rocking. There are also several bonus tracks on the CD version, including the band's decent cover of "Spread Your Wing" by Queen, and an even better cover of Satan's "Trial By Fire". How fucking cool is it that Blind Guardian actually cover a Satan song? Along with their Demon cover, it's one of their best renditions, sounding perfect in the hands of the Germans. Additionally, the fully orchestral edition of "Theatre of Pain" is nicely handled (some of these bonus tracks would appear once more on The Forgotten Tales compilation in 1996).

With the exception of "The Bard's Tale - In the Forest", this was a pretty stunning album for its day, by far the best power metal of 1992 and the best Blind Guardian album to date. The production is top notch, and regardless of how much dust might gather on the CD case, "Journey Through the Dark" will always be one of my favorite songs from this band, if not THE favorite. It shocks me to think that the band would top even this album with their next two releases, which are overall that much more solid, but Somewhere Far Beyond is the crossroads where Blind Guardian upgraded from pretty damn good to essential.

While "Somewhere Far Beyond" is probably my favourite Blind Guardian track, I found the album was not as 'full' as other albums, namely Tales, Imaginations, and A Night at the Opera. Though this is also coming from someone who got into them much later in their career and who had the benefit of being able to listen to most of the albums in quick succession instead of letting each of them soak in while waiting for the next album.

I agree, I definitely think the next two albums are more 'full' at any rate.