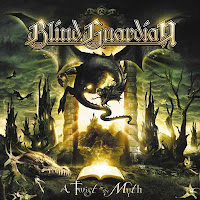 There aren't too many bands out there, especially in the power metal field, who can hold together a fanbase so deep into their career, yet by 2006, Blind Guardian were on the verge of releasing their 8th album and continuing to broaden their own. A Twist in the Myth seems a natural progression from A Night at the Opera, with a huger, even more processed feel to its digital sound, a slew of catchy new tunes, and a fresh young drummer in Frederik Ehmke (not that I'm inferring that Thomas Stauch was 'stale' by this point). Though it retains the heaviness of the past few albums, there is a certain element of accessibility which has crawled into their sound for this release...of all their albums, the songs here might be the friendliest for radio play and it only make sense that with age there comes a toning down of prior excess.

Speaking of which, the album is simply shorter than the last two, running at about 51 minutes for 11 tracks. Of these, there are around 6-7 brazen offerings which remind me of precisely why I love this band. The rest I could live without. Blind Guardian are still delving into interesting works of folklore and fantasy/science fiction lyrics, and there were a few surprises here which I would never have expected, as I've found the band almost always focused on more popular sources in the past.

"This Will Never End" is an extremly strong start to the festivities, a powerful and soaring track with a hint of menace that subtly underlies its chorus. Upon hearing this song, I was quite ready to have my socks blown off by A Twist in the Myth. Tasteful thrashing/speed metal licks wound into tightly strung melodies in the verse, and a chorus that climbs mountains in a breath. Based on the Walter Moers novel A Wild Ride Through the Night, it recounts the story of Gustave Doré, the boy who would cheat death or die trying. "Otherland" shocked the fuck out of me, as it is based on the science fiction series Otherland by the great writer Tad Williams (his fantasy saga Memory, Sorrow and Thorn would make for a great Blind Guardian album all by itself, but this sci-fi/virtual reality epic is also quite engaging until the sadly lacking finale). No surprise then that this is another good tune, carefully building its epic landscape like the elite fellowship of megalomaniacs of the novels who secure themselves away as lords of their virtual domains. I can't point out a specific 'payoff', but the whole track is engaging.

"Turn the Page" is a tribute to nature magic and the passing of seasons, and I didn't get much out of it save for the chorus and some of the glistening lead breaks. There is a folkish frolic about the tune which is certainly consistent with much of Blind Guardian's history, but I was simply not caught in its snare. "Fly" follows, the first single from the album, inspired by the film Finding Neverland, but balances the gaiety of Tinkerbell and Peter Pan with a solid, rocking anthem with an emotional build-up and climactic chorus capable of drawing a tear from even the most hardened enemy of the fairy tale. Possibly the best chorus of this entire album. "Carry the Blessed Home" is the first of three tracks on the album to deal with Steven King's Dark Tower series of novels, the saga of Roland the Gunslinger. It moves like a river through its Queen-inspired gang rock verses and a chorus dowsed in synthesized pipes, but I did not fall deeply for its charms.

From the lyrics (to a lesser extent) video, I've always privately held that "Another Stranger Me" should be Blind Guardian's penultimate tribute to Dr. Jeckyl and Mr. Hyde, but it's set against another Dark Tower story, The Drawing of the Three, based on the entertaining and flawed Odetta/Detta character. It's easy to understand why this was chosen as a single for the album, it's extremely catchy and rock & roll with a huge guitar melody, swaggering horns and a great chorus. The verse is quite seductive, though the payoff is about as subtle as a brick across the jaw. "Straight Through the Mirrors" features strong guitar melodies and a strong chorus, a song which lyrically lauds the importance of dreams to the waking conscience. "Lionheart" has an opening reminiscent of "Precious Jerusalem" from the previous album, percussive as it slowly drives into its soothing, memorable chorus at :45 which again features a huge rock rhythmic base. The solos here are flighty and wild, with a mystique that stretches above the pumping rhythm guitar chords, and it's the third track based in King's Dark Tower series.

Next come the "Skalds and Shadows", a ballad in the tradition of "The Bard's Song - In the Forest" or "A Past and Future Secret". The version here is fuller than the simpler acoustic found on the Fly CDS developing more power through its orchestration. But aside from the shanty-like acoustic guitar and references to the Norns, I found it little more than a curiosity. "The Edge" gives its chugging some room to breathe across a backdrop of brooding horn synths and scintillating electronics, a pretty intense tribute to St. Paul and his interactions with Jesus, and though it's not a favorite for the album, it's probably one of the more interesting constructions due to its seemingly bizarre of archaic subject matter and modern crushing power. "The New Order" is the final track of the normal release, but despite another big Queen vocal bridge and a grooving riff reminiscent of Sabbath, it's just not that memorable.

There are various bonus tracks one will find on different international releases of the album. My copy has "Dead Sound of Misery", which is essentially an alternate take on the "Fly" single, dealing with a far more interesting subject, the Whore of Babylon. I can't recommend the music over the normal version, it simply isn't presented in such a catchy manner, but if only they could have used these lyrics in place of Peter Pan...

A Twist in the Myth certainly benefits from a large budget Charlie Bauerfeind sound which is the result of many careful pickings over, undoubtedly a huge plus for many younger listeners accustomed to the modern radio they grew up with, but it had me longing for the old days and the sounds of Somewhere Far Beyond and the crispness of Follow the Blind. Still, the songs are the bottom line on any album, and A Twist in the Myth has a handful of winners that I'd include among any extended collection of essential listens. It may be my least favorite from Blind Guardian, but it's still Blind Guardian, and considering the quality control assurance this band maintains, I doubt we'll ever be hearing anything void entirely of mirth and merit.

Highlights: This Will Never End, Otherland, Fly, Another Stranger Me