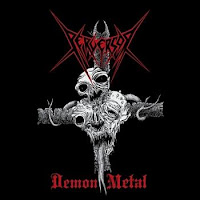 Hell's Headbangers continue to impress me with their astonishing knack for selecting some of the best, little known old school suffering you can find scattered about the many corners of the globe, and delivering it in joyous audio form. Chile's Perversor are another act who straddle the lines between black, death and thrash, and they do so with such an intensive venom that you barely have time to bang before your head is torn clear from your neck. Five ferocious tracks in 17 minutes, to follow up their debut Cult of Destruction from 2008, and if you feel you could appreciate a blend of Hellhammer, Mayhem, Bathory, Slayer, Possessed, and Sarcofago, swipe your credit card and acquire this for yourself.

They may not write the most original of riffs, but all are contrived directly from the very roots of their brutality. This band does not dabble in the subtleties or atmosphere that many others concieve...they simply crush you like a 100 ton force of blasting fortitude. So take the title of the opener "Detonate" as a warning, for the track is the stereo equivalent to cresting a hillside to examine a blinding light in the sky, only to be pummeled straight in the face with nuclear winds, every inch of flesh melting off your bones at the same time. A swelling, noisy intro interrupts into disturbing, ritual chants to herald the "Victory of the Legions of the Damned", which begins with a slaughter of slow, driving chords and double bass death before picking up a storming blackness. "Enthrone the God of Blasphemy" will remind one of Bathory, both the churning thrash chagrin of the first three albums and the raw, warlike, middle pace of a Blood, Fire Death track; while "March to the Temple of Doom" picks up the tempo so violently that it could earn the band a rapid expulsion from their homeland by the church and government, if they ever become aware of it. The track breaks into another storming, slower rhythm that channels Hellhammer and Bathory, totally disgusting as Torrid's haunting death bark with a black rasp echoes into the distance. The 5th and final "Command" is pretty similar, an artillery barrage at high velocity which melts into hyper thrash slag as it blasts into the silence beyond.

Perversor have a lot going for them, from the killer old-looking logo to the minimal cover art, late 80s aesthetics and songs that can disrupt your life like a tectonic shift beneath you, spawning demons and lava from the cracks in the Earth. You won't find much originality, in the music or the lyrics, but people tracking down this sort of release are probably not so inclined to seek it out. Another hearty (and I mean like heart jerked free of ribcage) recommendation for a Hell's Headbanger release, and one of the strongest bands I've heard yet from Chile.