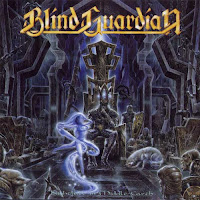 As you look back over the career of Blind Guardian, it would seem something like Nightfall in Middle-Earth was only inevitable. Taking their well established love for the world of J.R.R. Tolkien to a new height, it stands as one of the best tributes metal has ever mustered for the pinnacle of popular epic fantasy (outside of Summoning, who have a much bleaker outlook that I find most loyal to the writings.) But what's even more impressive is the specific material which the concept album is based upon... The Silmarillion. Hansi Kürsch and company could have taken the easy way out and written a concept album based upon The Hobbit or the Lord of the Rings trilogy itself, yet they instead opted to give musical life to the lesser known tales that created the basis for the setting and events of those more popular novels, stories which only a fraction of the most hardened Lord of the Rings fans have ever had the patience to sit through.

And they do this extremely fucking well...through 65 minutes and 22 tracks of their very best material. Now, before going further, I shall point out that 11 of these tracks are brief segues, intros and narrative pieces used to directly steer the course of the stories and set up the longer tracks. Most are less than a minute in length, and I have read a great many complaints over their presence here. While my initial reaction to these many shorter pieces was mixed, they have aged well alongside the core metal tracks and I now consider them an essential part of the experience, assuming you are listening straight through this album and not just seeking a few classic Blind Guardian tracks to toss onto your iPod playlist. Yes, give it the time and the attention, and Nightfall in Middle-Earth will gel with your imagination 100%. I'm not dismissing the fact that a few of the voices recorded for the narrative can seem corny or contrived, but then, this is Blind Guardian, and they've always been that way (arguably, so was Tolkien).

"War of Wrath" is the longest of the intro/narrative tracks, with the deep tones of Norman Eshley & Douglas Fielding against a warring backdrop before the surging "Into the Storm", a track that endlessly builds its momentum with Hansi's operatic approach to lyrical stories, using his voice in multiple patterns and octaves, with the band's penchant for chorus shouts, all scripted for pragmatic accuracy. This is the first album on which the bass is taken over by Oliver Holzwarth, so Kürsch is given full freedom to transform himself into the Teutonic sonar weapon in totality. You may have also seen me complain about Andre Olbrich's guitar tone on the later Blind Guardian albums (and Imaginations from the Other Side). Well, strangely enough, despite the same processed sound, the tone is absolutely stunning on this album, and I wouldn't have it any other way, as it gives the guitars a vibrancy and pop to stand out among the huge multi-tracked vocals and various instrumentation being used throughout most of the songs.

The stormy "Lammoth" intro sets up the gloom and balladry of "Nightfall", carefully wound into a chorus that feels as sharp as a blade, yet as soothing as breaking into an amusement park late at night and taking a solo ride on the carousel, the horses moving in steady rhythm and your mind reeling in reflection, drowned in the beauty of that stolen moment. "The Minstrel" casts Hansi into his bard-like fantasy briefly before the galloping mystique of "The Curse of Fëanor", sauteed in speed metal rhythms and left to simmer in the juices of an understated chorus that slowly elevates itself above a simple series of arena rock chords. The solos really wail in this track, and I enjoy how they twist into the vocal hooks before 2:00. Next you are "Captured" and whisked into the beauty of "Blood Tears", which strides past you like a river of lights at an Elven mourning rite, a procession of pain and remembrance that cannot stay solemn forever, and thus often rages out with a barely contained ballistic metal force.

"Mirror Mirror" (which was the first single for the album) first arrives at a folkish gait before the thunder breaks and the band charges out of the gate, weaving back towards the opening melody as it creates an escalating storm of melody of flutes and axes both acoustic and electric. "Face the Truth" narrates into "Noldor (Dead Winter Reigns)", with a shining acoustic grace soon leveled in a foundation of power chords and haunting but warm, vocal harmonies. Hansi is waxing his versatility here, as the popping acoustic funk of the guitar bridge transforms into a mounted rush into the slick, sultry dooming of the pre-chorus. This is a beautiful track which improves with each listen, until it clings heavily to your heart like the unforgiving snows of a deep winter. "Battle of Sudden Flame" features some beautiful flutes and acoustic strumming as Hansi once more conjures forth his inner troubadour, and then comes the greatest song of this album...

Finally I've found myself
In these lands
Horror and madness I've seen here
For what I became a king of the lost?
Barren and lifeless the land lies

If you've ever dreamed of a truly heartwrenching, power/folk metal epic, "Time Stands Still (At the Iron Hill)" is that and more. No Renaissance Faire is worthy of this song's traipsing, indispendable glories, as it leers to and from some of the best metal riffing this band has ever committed to disc. The chorus alone is enough to cast me back thousands of years to a world that never was, but all of the dressings here point to perfection, and this is the one song in Blind Guardian's catalogue that has ever come close to unseating "Journey Through the Dark" as a personal favorite. It is stupefyingly, outrageously awesome, and if it doesn't make you break into song immediately...well, you just need to work on that inner geek. That it stands among such high company makes it all that much more impressive, because after the mourning and rain of "The Dark Elf", "Thorn" arrives you exclaim that this record is far from finished. Gorgeous acoustic melodies, calming vocals, and an immortal chorus.

In the silence, it's time to explain
And search for truth in lies
Useful lies
Needless love's damned

"The Eldar" is a moody but sweeping piano piece with some of Hansi's best vocals on the album, an elegy to the ancient race of Tolkien's creation, pulled straight from a broader folklore of Europe. "Nom the Wise" is narrated into the dynamite injection of "When Sorrow Sang", which picks up the pace to that of Blind Guardian's past, searing speed metal with aggressive vocals and a killer mid section with a great little muted rhythm guitar bounce at around 2:00. The brief and beautiful "Out on the Water" and the imminent damnation of "The Steadfast" lead into the album's final, full-blown metal track, "A Dark Passage", a proggish folk metal opus that yet again reminds me of a German Queen long lost to the mythology of the fantasy world they inhabit. "Final Chapter (Thus Ends...)" is the last narrative bit, and to be honest the one segue on this album that I wish they had skipped, since it feels a little too obvious, and the end of a full-length track would have been more than efficient (and tactful).

Nightfall in Middle-Earth is hands down my favorite Blind Guardian album in terms of sheer content and production values, not to mention the fluently executed concept. Few would dare to touch The Silmarillion, yet Blind Guardian manages to take some of its more important moments and actually make them accessible. The writing is superb, complex enough to satisfy the more difficult metal fan, but loaded with big hooks for everyone. The entire band is on top of their game, seamlessly integrating each instrument into the more orchestral foundation. I did not care for the very end of the record, and there may have been a combined 2-3 minutes throughout where the riffs weren't mesmerizing me, but even if you clipped away this excess fat, there is an hour of essential metal music comprising one of the best concept albums ever released for its genre. I would very much like to hear the Germans produce another of its caliber some time in my life.

Highlights: all of the music of the Ainur.