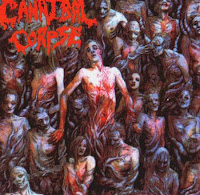 The Bleeding was the 4th album from Cannibal Corpse, and a rather pivotal point in their career, as their cover art and lyrics were creating controversy around the band. In fact, most people would not even recognize the real cover art for this album, since it was censored and Metal Blade was forced to release an extremely dull alternative. This was also a time for change in the cannibal camp, as guitarist Rob Barrett (Solstice, Malevolent Creation) took over the spot left open by Bob Rusay. It is the last album for Chris Barnes, who would soon be booted from the band, causing a foolish rift between stubborn fans who somehow believed that, because they hired a superior vocalist and (eventually) wrote better music, were no longer their precious little antisocial house band.

But for The Bleeding itself, one will be satisfied that the band have not relapsed into the boring efforts of their first few years, but have continued the path of quality brutality that began with its predecessor Tomb of the Mutilated. There are riffs on this album that are pure gold, and then there are those in between which do little but propel you forward into their betters. The mix does not feel so razor fine as the previous album, there is a much more weighted, bludgeoning tone, like the band decided to shift from the chainsaw to the ballpeen hammer as their choice weapon for clobbering fans and foes alike. Barrett and Owen are as tight as a pair of testicles in a vice, and this album is the best yet in terms of its guitar output, with busy, technical rhythms simmering over the low end hammering of Alex Webster, who is arguably the best bass player in death metal.

"Staring Through the Eyes of the Dead" is a solid tune which exhibits the guitars' flair for wavering patterns that create a tremolo-like effect, a low end trilling morass that always stands out among the palm muting corpsescape. Cannibal were certainly not the first band to practice such a technique, but their constant use of it to craft catchy moments into their songs would translate into a million impersonator bands, who are even today trying to come up with the perfect re-write to this very album. "Fucked With a Knife", now one of the band's live staples, is like a thrashing outbreak of cholera, passing form one unkempt metal freak to the next with the symptoms of gastrointestinal unrest and headbanging frenzy. It is customary for George to dedicate this one 'to the ladies' at live performances, and I'll never forget the time he was pointing at my own (ex) from the stage, terrifying her. Ditto for "Stripped, Raped and Strangled", which opens like an axe felling a tree and warps into another of the band's excellent guitar trills, this time followed by Webster's bass. This song serves as something akin to an anthem, because the verse is hard rocking and defiant and the payoff is like having concrete poured into your chest cavity and then battered into the pavement.

"Pulverized" is frenetic and fun, though it may not leave quite the impression of its fellows, whereas the creeping horror of "Return to Flesh" offers a more memorable distinction. The ability to plod forward while the guitars emit streams of paranoid horror is one of the true core strengths of Cannibal Corpse, one they would carry forward onto their superb albums like Bloodthirst. The full band commits on this track, include Barnes in one of his better performances. The way it plays with your instincts, ranging from barbaric to almost clinical, creates a grisly narrative within its borders, and "Return to Flesh" is indeed one of the band's best and most underrated songs. "The Pick-Axe Murders" follows with a dense, thrashing rhythm, and when it unleashes into blinding speed over the extended bridge, Barnes alternates between his decent grunt voice and rather annoying snarls. "She Was Asking for It" uses a pair of percussive guitar rhythms, one of chords and the other of screaming higher notes, to build a velocity over Webster's pumping, excellent bass line, before the whole track twists into a brickhouse groove in the verse. This is yet another of those great C.C. tracks that you don't hear much about, in particular the excellent breakdown at about 3:00.

Black, the blood of the dead
I wrapped my hands around her neck
Squeezing out her breath
Eyes rolled back in her head

So, Cannibal Corpse were definitely not out to make nice with any friends of the finer sex, much less any feminist organization. But as usual with death metal, you need to take the lyrics with a grain of salt, since they are purely fictional representations of violent impulses that mirror the nihilism and extremity of the music, a poetry of the dispossessed and fallen. "The Bleeding" offers charnel grooves and a woven mystique through the subtle lead melodies that hang at the edge of perception, until it explodes with surgical mass genocide through its bridge, a series of curving and eerie palpitations that were sure to please the tech death fan of the day. "Force Fed Broken Glass" is likewise incredibly, with an intense battery of guitar riffs and basslines that rise above and beyond the call of duty for the average death metal band. The breakdown into the verse loses a little steam, but it is recaptured through the spooked old school death rhythm of the bridge. "An Experiment in Homicide" is another qualified slaughter, with more mesmerizing bass that recalls a sped-up Pestilence when it races below the disturbing chords at around :30. No surprise that this, too, is one of the best tracks of the Barnes years.

The Bleeding was the end of an era, and although it was the swan song for Barnes, he left us with a positive impression here (though the snarls could be weak at times). It is a credit to this album that, despite its age, it still sounds fresh and inventive even by 2010 standards, and that's having been copied a countless number of times. The formula worked, and it's the same formula Cannibal Corpse is still using today: tight, technical songs that balance a mosh pit aesthetic with blistering spurts of jugular blood, delivered through a near endless reservoir of memorable riffs. I actually enjoy this album more today than I did when it released, though there are 2-3 songs here that I could live without and so it's a ways from perfect. As the best Chris Barnes fronted death metal album in history, it deserves a listen and a spot on the meat rack of any young masochist.

Highlights: Fucked With a Knife, Return to Flesh, She Was Asking for It, An Experiment in Homicide