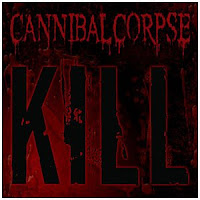 The Wretched Spawn barely scraped by on 'good manners', but such would not be the fate of its followup KILL. The rather minimal title and cover art of the band's 10th album anniversary could not be further contradictory to the wealth of its contents, a savage and refreshing beating which features as many tracks as the predecessor, only this time...most of them are great. Yes, the writing may not stray far from the band's tried and true appetite for destruction, but it almost feels as if a fresh coat of blood has been spattered across their weary joints, a renewed haze of violent fervor applied to their sights. Perhaps it was the fact that Jack Owen had grown tired and decided to move onto other things, with the Corpse bringing back Rob Barrett to the fold to hack and thrash alongside their now resident axe guru Pat O'Brien. Perhaps they just went back to examine what made their previous works like Bloodthirst so eminent in a field of wannabes who
could score nothing but brutality.

Regardless, I'd like to give KILL an alternate title, Bloodthirst II: The Harder They Fall, because it possesses all the strength of that phenomenal effort and cranks up the biting crunch of the guitars to a thrashing guillotine level of force, I meant the level of abuse this album dishes out should certainly provoke a lawsuit from any sane listener, but then, we're probably not so sane after all. "The Time to Kill is Now" is like an injection of Razor's raw thrash (we know C. Corpse are fans after their "Behind Bars" cover) into the concrete sledgehammer of brutality we have come to expect, with action ready, frenetic riffs that define the word momentum. "Make Them Suffer" briefly grinds at a slower slog before the band once again erupts into death/thrash carnage, and "Murder Worship" weaves its grisly arching melodies over a pure classic Corpse pit annihilation, after which a forceful blast awaits to loop you back around over Webster's inflammatory fingering.

After this, "Necrosadistic Warning" scours the field, one of my personal favorites of the album, with the bustling bass lines and cavorting, winding muted guitar rhythms which tease at you in their unrest, too casually floating forward into momentous tanking riffs that flatten you into the pavement. "Five Nails Through the Neck" is another, similar tune which maintains the pace, building into a nice rise and fun chuggernaut. "Purification Through Fire" opens with a flailing, bleeding melody that transforms into one of the sickest, searing riffs in the entire Cannibal Corpse discography, leads crashing all over the morgue as the furnace is lit. "Death Walking Terror" is a short but sweet pit pummel glazed in old school trashing gooiness between the clinical rhythms and sadistic grooving. "Barbaric Bludgeonings" is just a band being honest, while they fist every orifice of your being simultaneously with meaty knuckles of brutality.

"The Discipline of Revenge" has a fantastic lead-in with Webster's spastic playing laden in more of the band's surgical melody, and the "Brain Removal Police" deserve credit for not only their killer song title, but the tech decimation contained within, a two-fisted thrashing dynamo that bristles to the brim with frenzied intent. By the time "Maniacal" rolls in, you almost feel a sense of redundancy in the consistent bludgeoning this album commits, and as a result this and "Submerged in Boiling Flesh" are probably the least impressive tracks, though they offer no end to the killing spree. Instead, it is the sluggish and creepy instrumental "Infinite Misery" which crowns off yet another string of murders for America's pride and glory predators, a nice outro in which you are given a few moments to gather your thoughts.

I hate to say it, but KILL is almost too much of a...killing, to sit through in one take. Of the 13 tracks, you really only need 10-11 to deliver the point across, and yet the additional takes don't diminish the value by any logical extent. This is really one of the very best of the Corpse albums, proving the band still has the chops nearly 20 years into their career. The punctual proficiency of the band is at an all time height, with Alex Webster everywhere and a rigid performance from the newly paired O'Brien and Barrett. Fisher sounds like he is enjoying himself, with a solid set of lyrics and vocal patterns, though nothing standing out too far from the musical delivery. This is not only a great Cannibal Corpse effort, it's a great death metal album worth owning, whether you are a long time fan or some silly skeptic who hates popular bands (that have lost none of their spunk), or some backwards moron who shies away from post-Barnes releases from this band, afraid to crawl forth from pitiful denial. Spend the money, and get your neck snapping.