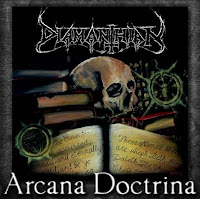 Ah. The sounds of pure, old school death metal doth fill mine ears like a wind of carnal putrefaction, as cadavers everywhere continue to decompose and the rest of us stand in line awaiting our own graves. Diamanthian is a British band who could give a willing fuck about the past 15 years of the genre's wankification, 'progress' and other unnecessary mutations made to appease an ever widening pool of spastic, attention addled children. If it's not menacing, if it's not dark, and if it's not true 100% death metal, you will not find it here. This is surging, brutal roots death in the vein of the classics: Morbid Angel, Bolt Thrower, Deicide, Death, Entombed, Dismember, and Cannibal Corpse, with most of their strengths, and no cause for innovation. Arcana Doctrina is their 2nd full-length effort; they've been in existence a decade, and from the sound of it, they know how to do this style right, with a killer, straightforward tone that is part butcher block and part necropolitan mystery.

Here beneath this tomb lay eight original cuts and a cover of fucking Demigod (worth at least +66 scene points) in just over three-quarters of an hour, and while the songs have few individual riffs I could describe as inspirational or highly memorable, the overall product is a successful, dark jaunt into the barbarism incurred in the early 90s, when these bands were actually considered heavy and their outlook frightening. Diamanthian lyrically dabbles in both the occult and the bewitchment of good old fashioned sacrilege, though not in some mindless Deicide libation, but rather a very serious business.

Like insatiable unchained wolves
They feast upon the body of man
Provoking a hateful contempt
Gods of war, fleshbound and damned

Arcana Doctrina is a fairly level effort as far as the writing of individual songs, but it grabs you by the gut immediately with "Christ Dementia", a journey through grinding low-end bombast, stop/start walls of shimmering, mortuary wall chords, and vile melodies that captivate despite the feeling you've heard them all before. "Defiling the Eucharist" shambles onward like a drunken serial killer trying to flop his way out of a local bar before the night's festivities, stretching into a series of warped octave chords and churning low end batteries that shatter the stained glass of the local cathedral. "Transfiguration" is a vibrant burst of mean spirited corpse shoveling rhythms that coalesce into a charnel house of chug-to-splatter rhythmic altercations. Other choice killings would have to include the tumultous "Castastrophic Divine Judgement" and the monstrous "Awakening the Leviathan" (monstrous, get it? hah) which ranges from death bludgeoning to a stream of descending, dark doom by its finale. The cover of Demigod's "As I Behold I Despise" (from 1992' Slumber of Sullen Eyes) does not differ greatly from its source, but it's a wonderful choice, and sounds good here.

Diamanthian are not selling us something new, but they are selling us something that old school sociopaths can still appreciate, even if it's 15 years late for the game. The album is not produced to the sound standards of that period, and thus has a bloodied, chunky modern polish to the casket's surface. If you're the type to sit about with your old vinyl/CD collection and ask yourself why they just don't make 'em like they used to, invest in Arcana Doctrina and realize that they still do make them, and they often clean up well.