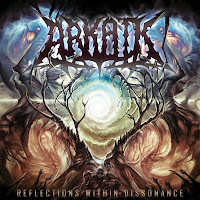 Because California was not already brimming with young, energetic, technical death metal acts (Odious Mortem, The Faceless, Abysmal Dawn, or the older Deeds of Flesh, Severed Savior, and Sepsism to name a few), they also had to spawn forth the brash and dazzling Arkaik, who, with their sophomore outing Reflections Within Dissonance, assist in confirming that state's claim to the throne of the modern US death. Like their peers, the band blends all the right influence of their forebears Cannibal Corpse, Deicide, Morbid Angel, Cryptopsy and Suffocation into a writhing mass of mile-a-minute riffs and just enough showmanship to prove their technical ability without completely indulging themselves and destroying the songs.

Like any similar act, you need a few listens to really swallow what Arkaik are brewing, because they compose in that same labyrinthine temperament which does not believe in giving the listener a break, simply imploding them with confusion and letting the maggots sort out the rest. As a result, the songs do tend to run together into one 34 minute mass of cross-dimensional violence and reality bending. After the schizoid intro "The Transcendent Spectral Path", it is off to the races for the crushing title track, a tight central Morbid Angel/Deicide style rhythm with insane double bass pandering, then to erupt into a frenzy of the band's bludgeoning whims, complete with tiny surgical death melodies and effective if average, blunt weapon grunts. I like the lead breakout, but this is not one of the stronger tracks on the whole. "Paradigm" and "Obscured Luminosity" both offer a superior experience, running the gamut from juggernaut grooves to flippant finger exercises.

"Womb of Perception" has a great little hyper-thrash rhythm off which it weaves an apocalypse of dementia, almost too acrobatic to comprehend through just one listen. "The Divine Manifestation" tries to apologize with a more steady, death-thrashing ala Deicide or old Malevolent Creation, but the band cannot help themselves, wiring into some of the more noodly and headspinning guitar fills of the album. The remainder of the album follow suit, with standouts being the rhythmic frenzy that is "Elemental Synthesis" or the sombering stomp gone manic "Face of Regression".

You will feel like you've heard this all before, of course (see the list of bands in the opening paragraph), but that doesn't really lessen the amount of practice the band members had to do (both individually on their instruments and as a cohesive unit) to arrive at this state, and Reflections Within Dissonance is an album certain to sate any who think fondly upon the band's marvelous peers. With enough proficiency to evoke envy in the less rehearsed, enough space-like leads to open a wormhole into the beyond, and enough twisting, turbulent, teeth chattering chug offs to tally up a huge dentistry bill, Arkaik is a spectacle to behold.

Of course, since I couldn't afford the bill, I had to send it to Arkaik. And my dentist is pissed.