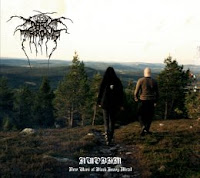 Darkthrone must have enjoyed the results of the Too Old, Too Cold EP from the previous year, because as that release was to The Cult is Alive, so is the NWOBHM (New Wave of Black Heavy Metal) EP to 2007's F.O.A.D. (Fuck Off and Die), which released about 2 months after this became available. As such, there is a lot of material on this EP which has since become redundant, but for the diehard fan who buys anything this band will ever release, it isn't the least value I've seen from them.

There are two tracks here which come from the full-length F.O.A.D., but each is offered with a slight variation. "Wisdom of the Dead" is a great, creeping track which would seem to tout the party line here, that is to say it's pure old school Darkthrone given a classic metal injection, the Style of the Isle, as I like to put it, simultaneously breeding nostalgia for both the original NWOBHM and the dark vistas of this duo's storied past. There is an understated feel to the song which I really appreciate, in particular the moody bridge riff which conjures the mystique of the title. Kind of mellow for Darkthrone, but also captivating. "Canadian Metal" is fun as fuck, one of the better tracks from F.O.A.D. that channels punk fuel as it offers libations to the great obscure bands of North, North America through some simple name-dropping of song titles. The mere mention of "Take This Torch" in the lyrics had me fawning with admiration, but the riffs themselves are fucking crushing, especially when it hits the chorus. The difference between this and the album version is simply the vocals, but both are highly effective.

For these fuckin' sounds my angry heart calls
Canadian metal, just obey
On your weak sounds, new plastic metal, we will prey...

The non-album track "Hedninger Fra Helvete" might be the biggest draw on this recording, a cool mid-paced track with vocals in Norwegian which stylistically follows "Wisdom of the Dead", a mellowing track seared in great classic metal guitar tone with a great, cult Darkthrone bridge over the galloping drums after 2:00, and a somber break after 3:00 dowsed in an almost psychedelic, vibrant atmosphere. The last track is a repressing of the "Bad Attitude" cover from New York's Testors, which we already heard on the band's limited 7" Forebyggende Krig. Since this EP has more value than that, it allows you to skip it altogether, rendering that release even more useless.

This EP presents me a bit of a poser, because I really love "Hedninger Fra Helvete", but the rest of the tracks are available elsewhere in a form just as good as they appear here. If you're going to pick up any version, I would advise you hunt down the CD, because the 7" NWOBHM only has two tracks: "Hedninger Fra Helvete" and "Canadian Metal", good but just not worth it when you can get the CD of this and take the complete pass on Forebyggende Krig.

Verdict: Indifference [5/10] (these lesser lights should learn from you)