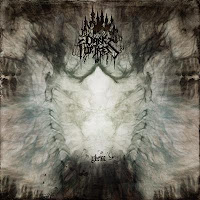 German's black metal scene has been busy for well over a decade now, with a great many bands pursuing the various styles within the over-genre, from rasping, primal cult black, to symphonic, and every shade in between, but few have been as ambitious as Dark Fortress. Ylem is their 6th album, and their 3rd for Century Media, and if anything, it is their most full-bodied, diverse effort to date, with over 70 minutes of material that ranges from a precision black brutality to tracks that have almost nothing in common with their back catalog. Coming off the extremely strong Eidolon in 2008, the band have decided to wax their studio powers in directions one might not have expected, and the result, while often suffering from some pock marks in quality, is definitely far reaching.

Yes, I'd venture to call this album 'accessible' when compared to the band's previous albums, but this is in no way some implication of the band 'letting' up, as the trilling rifling central melody of title track "Ylem" is interrupted with violent, thick grinding guitars that make (newish) vocalist Morean feel like he's climbing walls of syrup, before the melody imposes itself back alongside the choppy black chords, and the track steers into an atmospheric beast. "As the World Keels Over" starts with a proggish segment, bass plomping and bluesy, desolate guitars jangling into the thick stream of brutish melody around the corner. You'll notice this aesthetic quite a lot, through the following track "Osiris", the grooving momentum of "Redivider", and the lengthy brooder "The Valley", but Ylem still has its share of blasterfare, in tracks such as "Satan Bled" and "Silence". Perhaps one of the more interesting departures is the penultimate "Wraith", with its clean vocals that sound like an entirely separate band...I can just picture the culties writhing in disgust at such a track, as this sounds more like Porcupine Tree meets Solitude Aeternus than a Dark Fortress track, and yet it's still fairly engrossing.

How you rate Ylem will depend on how much you have longed for the band to spread their wings and engage in other territory outside their native black soil. It is clear they have an interest in progression, and have done so here far more than their previous albums like Seance or Stab Wounds. If you don't recoil at the thought of such possibilities, check this out. It's a well mixed album with a unified vision, despite the diversity coating the band's corpse painted, carnal core. I wouldn't call it anything close to their best, but for a 70 minute sit through I never really found myself succumbing to ennui. If you want to hear them firing on all cylinders and kicking some serious ass, then just listen back to one of the past three albums.

This album really has the feel of them being on the cusp of breaking out into a fascinating new direction, but they haven't quite figured it out. Definitely worth hearing, though.