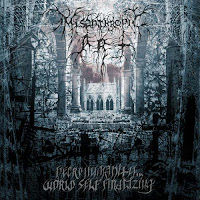 While some 'bedroom' black metal artists attempt to live up to the raw purity of the genre's pioneering acts, using live instruments and their recording equipment to simply translate their noise into as crude and direct form as possible, there are others who seem to embrace the technology, unafraid of drum programming, and creating a highly distorted, digitized breed of black with ambient and industrial influences. For his fourth album, the Russian Sadist (i.e. Misanthropic Art) has gone off in the latter direction, to quite a stunning effect. For all its perplexity and chaos, Necrohumanity... World Self Finalizing is a gripping and scintillating experience which feels like a futurist exposition on the decay of all mankind, cast in a ghastly atmosphere of synthesized, rambling drums, hyper kinetic, processed guitar lines, and diabolical vocals that transfer their wisdom and woe into your mind like a choir of ungodly abominations descending upon the Earth.

Take elements of Aborym, Emperor and Myrkskog, blend them together and then trip them out to the wildest extremes, with psychedelic electro impulses, and you might approach the imagination of this solitary being. The album opens with a Mr. Smith Matrix quote, then quickly proceeds to bludgeon forth to a wave of dementia known as "Illusion of the Life's Logic", in which a myriad of riffs crash and collide against a cosmic nightmare created entirely through the processing of the guitars. The composition is unholy fucked, like a desperate inmate at an asylum trying to find which of his multiple personalities raped and murdered his orderly. "Green Sleep of Sickness" operates like a morbid operatta, heavily affected guitar tones soaring off into its nightscape while Sadist's vocals widen and close like the cervix of an elder goddess, consuming hope and birthing horrors from beyond reality. There is a glorious pulse through this track which becomes difficult to place your finger on, and yet it's easily one of my favorites. "Worldselffinalizing" opens with a freakish melody, accompanied by waves of tapping and a softly grinding lower end, while "Necrohumanity" is a swelling dark ambient track which operates in the vacuum of the human soul, like something you'd expect from an early 80s sci-fi b-movie. "Ashes of Sterile Existence" is another of my favorites here, for the wavering, twisting melodies and mash of spaced out energies, and the album slows to an interstellar, doomed crawl known as "The Down", a fitting climax to a bizarre labyrinth of perterbed emotion.

Sadist really draws a line, and then crosses it, disappearing into the vortex beyond, and with luck, taking you alongside him. This album is actually a few years old, at least the recording, and only being released now, so it is possible there could be a followup before long, which plies even more esoteric waters. Be warned that this is not your accessible form of experimental black metal, it is highly processed and will not likely appeal to the devotee of 'proper' rock instruments. It's a skewed and warped approximation of black metal which is fascinating in its foresight.