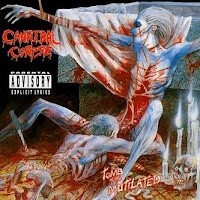 From the incredibly seductive cover artwork, to the stronger balance of the songwriting and a mix which slices and dices, Tomb of the Mutilated shows all the signs of a band who probably didn't like what they had to offer on their previous splatter platter, and took steps to ensure that #3 would be a charm. The riffs are tighter, in part because the guitar tone is the audio equivalent of a sharpened surgical tool parting skin and sinew directly down to the bone, and in part because they are simply better plotted. The breakdowns here are a lot more satisfying musically, and the once could even sense a slight increase in 'melody', though it's the kind of melody that makes you feel like you're in an emergency room late in the AM hours after trying to cut the pain out of your life one vein at a time.

I'm not about to praise its virtues to the high heavens, of which the members of Cannibal Corpse will surely not be allowed to partake, but this is far closer to the band that I know and love today. Tomb of the Mutilated features the same lineup as the previous two albums, but there is a far more noticeable presence here from Alex Webster, whose busy lines are anchoring the savage thrust of the guitars like a popping mortician's aid prepping the corpses for examination on the meat block. Barnes is pretty much as dull as ever, but his vocals benefit from their guttural counterbalance to the knife-like guitar rhythms, once again a plus to the production. Stylistically, not much different than their prior efforts. Just flat out superior...

Everyone knows "Hammer Smashed Face", and it delivers an opening rhythm worthy of the name, as the chords pound into you like an oncoming train. The breakdown at around :50 proves instantly that this band has arrived at an understanding of how NOT to bore you when its time to break out those palm mutes, with a sinister Slayer-like melody threading through them. "I Cum Blood" continues the band's knack for memorable song titles, and the track itself is a grinding surge with another neanderthal breakdown which is, admittedly, not one of the strongest on the album. "Addicted to Vaginal Skin" (and who isn't?) is sexy, with a fucked up cannibal sample and a truly surgical, ghastly lurching rhythm that rolls forward into brief bursts of splattered giblets, the guitars bursting out into a deep thrashing frenzy that will nearly decapitate the listener.

Even though now I'm dead within
My mouth drools
As I slice your perineum
My body smeared
With the guts I've extracted
through her hole, came swollen organs

Yes, it is utterly fucking disgusting. Yes, it's not the kind of thing you want to go repeating at parties, unless you have some really cool friends. And yet, for all the repressed serial killer perversions and desires, Cannibal Corpse would be the band that launched a million ships, or rather, other bands who clumsily ground against each other to see who could come up with the sickest, humorous song titles and lyrics. These gentlemen may not have been the first, but they were clearly the most influential, since they provided a gateway for many new metal fans not previously aware that the genre even existed until they happened upon a certain Jim Carrey film.

"Split Wide Open" continues to jab and thrust, the vorpal edge of each guitar line weighted with a concrete climax. "Necropedophile" must be like getting the best of both worlds, at least if you are a sick demented fuck who thinks of such ideas as anything more than ridiculous posteuring. I enjoyed the way the bass chords popped alongside the bridge riff, but it's not one of the stronger songs on the album. "The Cryptic Stench", however, sticks immediately with a massive, thrashing wall and some devastating, old school sensibilities. After all, it WAS the old school. A brutal and effective track that sadly doesn't get a lot of love in the band's set lists. Cannibal Corpse will next one up themselves yet again with the exploitative torture orgy "Entrails Ripped from a Virgin's Cunt", and "Post Mortal Ejaculation" sorties through another of the band's clinical riffs, putting the listener directly on the operating table at the local malpractice. "Beyond the Cemetery" is another of the band's criminally overlooked songs, with ripping guitars that pretty much terminate anything off the first two albums. Bloody and beautiful.

Tomb of the Mutilated falls just short of greatness, because a few songs slack behind the rest in terms of the writing. But it's the first 'good' Cannibal Corpse record, and deserves respect for refining the band's prior meddling into a force to be reckoned with. It's the warning siren of a lethal banding finally shifting into gear from park, and strangely foreshadows a lot of the excellent future albums the band will write with George Corpsegrinder in the fold. Today it sounds nearly as livid and razor sharp as it did when the vein was first tapped 18 years past.