The Imaginarium of Doctor Parnassus (2009)

Though the film will likely be remembered more for being the last of the promising actor Heath Ledger before his death, The Imaginarium of Doctor Parnassus should hold significance as the first collaboration of its creators (Terry Gilliam and Charles McKeown) since the excellent The Adventures of Baron Munchaussen 21 years ago. Like most Terry Gilliam pictures, it is a visual feast, complementing his colorful aesthetic for stage settings and props with some very interesting alternate worlds that the audience will visit through the mental powers of the titular character. As far as the story, it's rather weak...essentially a loose plot which serves for little else than driving forward the parade of gorgeous scenery and creating a less than compelling conflict between its representative forces of 'good and evil'.

Doctor Parnassus (Christopher Plummer) is a traveling mystic, who once lived in a temple of aesthetics that told the stories of the world. He meets the Devil (a real scene stealer courtesy of Tom Waits), and the two begin a long series of bets to outwit one another, ending up in Parnassus' immortality, which he gradually begins to see a a curse rather than a blessing. In today's world, Parnassus runs a traveling sideshow in which the audience can enter his magic mirror and experience their imagination. His troupe is rounded out by Anton (Andrew Garfield), Parnassus' daughter Valentina (Lily Cole), and Percy (Verne Troyer doing a decent turn as the all wise and useful stage hand/assistant). The troupe eventually discovers and rescues the high class criminal Tony, who is hanging himself from a bridge and has apparently lost his memory.

Of course, there is quite a lot more to Tony, as his questionable past gradually leaks out. He's a con man and exploiter with a certain magic trick allowing him to survive execution. But for most of the film, he fits in with the troupe as a smooth talking charlatan who Valentina takes an interest in. As it turns out, though, Parnassus is only a few days away from losing his daughter to the Devil, in one of their many bets. But they will make one more bet, and this serves as the driving 'plot' that attempts to string together the shambles of a film we have been presented. The Doctor and the Devil will race to claim 5 souls through the visionary worlds created in Parnassus' mirror, and whoever wins gets to keep Valentina. There's a little twist or two in the film which are not surprising and not all that interesting, but I'm going to be honest...the story is pretty much a throwaway comedy errors, a slightly dark fairy tale.

So if there's a reason to go and see this film, it's the all around great cast and the imagination sequences, which provide some mind blowing special effects and often abstract scenery. The flashback to Parnassus' monastery is fantastic, as are the kid's candy dream and the sequence in which Tony is fleeing Russian mobsters on a giant ladder split into stilts. In fact, these visions are so interesting that they make the remainder of the film feel rather drab, as your desires race towards hoping for a glimpse of the next bizarre world. Not all of these are perfect; for example the rich old lady's dream, in which Valentina floats around awkwardly making innuendos at Tony, is pretty dumb, and some of the imaginary backgrounds are just barren stretches of rock and decay behind the actors. At the end of each imaginary sequence, the 'dreamer' is given a choice or enlightenment or sin/desire (the Devil's domain, which is generally a neon-lit whorehouse or bar). It's all a little too obvious, but the design at least is fetching and fits Waits' character. 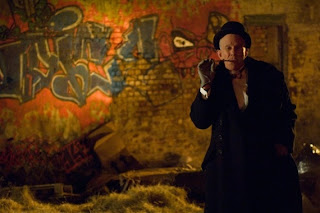 The score from Mychael & Jeff Danna is rousing and not subtle, and the actors mostly do a good job with what they are given. Since Ledger passed away before the film's completion, other actors were cast to finish his parts, and Gilliam did a nifty job of putting them in the various dream sequences, where the face of Tony is altered but the dashing rogue personality remains. Johnny Depp, Jude Law & Colin Farrell make the transition seamless, which is not so difficult as Ledger's portrayal of Tony is not much more than a typical scoundrel with an accent. Of the three, Law probably sparkles the brightest. I liked Verne Troyer here, and Andrew Garfield, but I think the cake has to be given to Plummer and Waits. The former turns in his typically good performance, though a little more reckless and drunken than you may be used to. The latter simply rocks every scene he appears in, and is one of the more memorable portrayals of the Devil in recent films. This is the kind of Devil we'd all probably like if he were a real figure.

The Imaginarium reminds me of Hellboy II: The Golden Army as far as it being a shoddy story used by a skilled director to connect a sequence of unique, dazzling visual effects and scenes. Although it's a decent film worth seeing once, it has absolutely nothing on Gilliam's wealth of classics like Time Bandits, Brazil, Munchausen, The Fisher King, the Python films or his amazing Fear and Loathing in Las Vegas. But it's a little better than The Brothers Grimm...