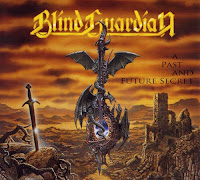 Let us not mince words when it comes to the eternal fleecing of the music fan at the hands of their tormentor: the industry. They are out to rape your wallet, and rape it hard. They always have been. When a band achieved a solid consumer base for their releases in the late 80s (through the present), the CD single was not far behind...in the grand tradition of vinyl and cassette. So it's not a surprise then that Blind Guardian and their record labels through the years have been tasked by the same impulse, and have put out about 10-11 of these things.

Blind Guardian was a pretty huge band, even by 1995, and if they release a few tracks as a teaser in advance of their Imaginations from the Other Side album, so be it. I admit to importing the blasted thing myself. "A Past and Future Secret" and title track "Imaginations from the Other Side" are both present, two excellent tracks from one of the band's best overall releases. The title track to the single is a great orchestral/acoustic ballad with an impassioned performance from Hansi, far better than prior attempts like "The Bard's Song - In the Forest". "Imaginations from the Other Side" is a powerful, driving song which is representative of that album as a whole: heavy, progressive, with Olbrich's melodic squeals weaving through the processed chords, and a brazen, unforgettable chorus.

The remainder of this single consists of the band's cover of "The Wizard" by Uriah Heep, and an instrumental version of "A Past and Future Secret". The cover is decent, and the instrumental is perfect for your Lord of the Rings karaoke party with all your dorky friends whose fandom does not exist outside of J.K. Rowling, Robert Jordan and Peter Jackson. As a teaser at a decent price, this single would not have been a total waste of time if you wanted some new Blind Guardian months before the release of the full-length. But in retrospect, it is almost entirely without value...as "The Wizard" was released on The Forgotten Tales compilation and the two studio originals are part of a kick ass album alongside many others. So, unless you really want the instrumental track, or you collect useless plastic media which would be better off melted into slag, there is no reason to own this in the 21st century.