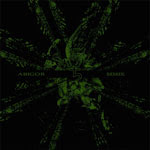 Anyone caught dreaming that Abigor were going to suddenly shy away from the post-modern, experimental direction they took with 2007's Fractal Possession is in for quite a downspell, as Time is the Sulphur in the Veins of the Saint makes its predecessor seem almost 'accessible' by comparison. Never one to abide by trends or give a flying fuck about what some backwards fanbase expects of them, Abigor have cemented their commitment to a vivid exploration of sound, loosely rooted in the black and industrial hybrid of their last effort, but straining the boundaries of balance and sanity. The entire album is a 38 minute concept broken into two untitled sections, thus one is removed from even the benefit of labeling its individual tracks. It is meant to be taken in at a sitting, which can become quite a trial as its ever shifting landscape rarely decides to about face and tread the same terrains.

Progressive by the very definition, Time is the Sulphur in the Veins of the Saint is far beyond the constraint of simple idenfitication. There is metal here, and plenty of it, but it is almost always used as a percussive force or a titillating wall of melody that drives the narrative nature of this cerebral, paralytic story. Perhaps some of the most frenetic and insane fretwork occurs just beyond the 10:00 mark of "Part II", which sounds like earlier Cynic on crack, and P.K.'s bass is nearly as fragrant and volatile as his guitar. Yes, this is the type of album fans of Mr. Bungle, Ephel Duath or Dillinger Escape Plan might find themselves invested in, though they will be dealing with Arthur Rosar's debilitating, decrepit vocal candor which walks the fine line between a blacker aesthetic and the early adopted EBM torture of Skinny Puppy. But for the chaos present, there also rings a clarity, a penchant for moments of soothing and hypnotic scenery, like the clockwork that opens "Part I" (the more chaotic of the two presentations) or the haunting midsection of "Part II".

Though I found myself drawn in, fascinated by the band's currency of anarchic sonic architecture, I will admit there are points at which the album does stumble forward to evoking each new level of consciousness. You become so reverent towards the sheer effort of the sound's entropy, that individual rhythms do not often feel striking or catchy apart from the sum of the composition. The guitar tones are often quite thin, as if to counterpoint the fuzzy, plumbing bass tone, and though it will often rage forward into something resembling a black metal blast, this is an album more of subtleties than brazen riffing. The previous Fractal Possession had a lot more moments that would scream out inside my head, but this is still an interesting journey that should satisfy fans of the avant-garde and bizarre (Solefald, Ulver, and Fleurety all spring to mind as bands who walk a separate, but similar path of the outsider).

To make it even more fascinating, this album is part of a pseudo-set with the latest from France's Blacklodge, based around an Albert Einstein quote...not something you hear every day.

Yeah, it's super good, but some of the songs on the previous album were much more striking. Also, it really sounds like it's a tape rip, because there are pretty obvious breaks that indicate different songs on each Part.