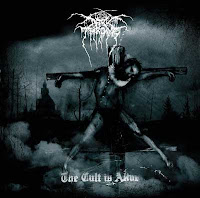 Enter the birth of Punkthrone. Perhaps I exaggerate here, but it was clear from the mild stagnation of (the still excellent) Sardonic Wrath that some sort of change was once again inevitable in the Northern camp, and The Cult is Alive, LP #12, is where this would begin to really take place. Now, the band has always admittedly carried the punk, rock and classic heavy metal influences through their career, wearing them boldly upon their sleeves, but never has it been more obvious than the tonal shift taken with this album. Not only through the music itself, but the extremely blunt punk lyrics on a few of the tracks which are at once self-deprecating and scathing critiques of what the 'black metal' scene had lost sight of, in addition to celebrations of the very art Darkthrone had mastered numerous times already in a single career...

But if you're worried that the band has lost their identify, fear not, because this entire album still fits snugly into the black metal realm, with the same raw Culto vocals you've come to expect, and a slew of riffs which do naught but honor the roots of the genre, plus the thrash, punk and heavy metal from which it evolved. For an early comparison, think of Brazil's Sarcofago. For a modern comparison, think of Joel Grind's Toxic Holocaust, who has been creating a more frenetic mesh of these aesthetics for years. The Cult is Alive does not sound quite as fast or crazy as either of those, but you get the general idea.

"The Cult of Goliath" begins with a barbaric rhythm reminiscent of some of the songs from Ravishing Grimness, with a savage thrust to its verse that is wholly violent slaughterpunk, and I love the breakdown, which is pretty rock & roll, with a lame but lovable guitar solo. Speaking of the rock, "Too Old, Too Cold" was already known to most, having its own EP release a few months before this full-length arrived. It's black punk rock, Hellhammer meets the Ramones, with some lyrics that, while a little awkward, pretty much encapsulate the feelings of Fenriz and Nocturno Culto towards the ever propagating scene of black metal hipsters, armed with irony and designs on exploitation. While fun, the song is actually not one of the better offerings on the album, and aside from the rather open lyrical call to arms, I'm not sure why it was chosen as a single over some of the others. "Atomic Coming" is far more of a bruising hymn, with blistering old school speed/thrash riffs that herald annihilation, congealing well with the crushing chords of the black/punk foundation.

"Graveyard Slut" had also been released on the Too Old, Too Cold EP before the album dropped, but this is the version with Fenriz' 'Tom G. Warrior' style vocals. The song is highly entertaining, conjuring up nostalgia for teenage years of getting drunk, vomiting all over your denim jacket with all the great patches, and desperately failing to win the affections of that one semi-cool girl in your school who you mistakenly feel might accept you, even though you managed to get the car for that one Friday night. Oh, the pain! "Underdogs and Overlords" returns to the Culto vocal, and the second riff here is total asskicking blackened rock'n'roll, a groove that Thin Lizzy or Iron Butterfly might have conceived had they actually known and coveted the face of evil. "Whiskey Funeral" reaches even further back, grabbing and blackifying a raw rock'n'roll foundation, foreshadowing pretty much the entire Dark Thrones and Black Flags album. It's pretty damn cool, with a searing speed/thrash bridge rhythm and a nice melodic collapse before returning to the speed.

For the next two tracks, Darkthrone remembers that they are in fact Norwegian. "De Underjordiske (Ælia Capitolina)" leaps between the languages, a grimy, flowing rocker with bright chords that make Culto sound all the more menacing. "Tyster På Gud (Preemptive War)" opens as total hardcore punk, which falls somewhere between Discharge and Minor Threat in tone, with a little of the band's guitar bending chagrin', and a Hellhammer-ing breakdown. "Shut Up" is actually one of my favorites on the album, despite the rather no-brainer song title, with some excellent, filthy rocking rhythms and amazing vocals which ooze unbridled aggression. The fuzzy solo is quite cool, and the clamoring bridge hook, but believe it or not, there is also quite an amazingly dark black/death metal rhythm here as well. "Forebyggende Krig" was the 2nd single for the album, a more traditional black/doom rhythm piece that venerates the previous albums of Darkthrone such as A Blaze in the Northern Sky.

The Cult is Alive doesn't start off all that great, but it certainly picks up steam as it progresses through the track list. "The Cult of Goliath" and "Too Old, Too Cold" are passable, but I had already heard the latter a number of times and was beginning to get tired on it. Once the album hits "Atomic Coming", the rest is basically sheer bliss, and Darkthrone perfectly translates the more widespread influence of punk and rock into their sound without losing the bludgeoning barbarity of their youth. The production here is astounding, pure and cold and raw and as perfectly plotted as most of their other work. Truly, this is one of their 'fun' albums, but it also maintains a surprisingly serious side, ala the message found through some of the lyrics. It's probably cool to hate this record by now, but that's the great thing about Fenriz and Nocturno Culto. They are the antithesis of cool, and that is why are so endeared to their efforts.