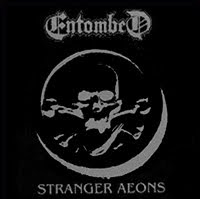 Since the band was already considered a success as early as their first two releases, with Left Hand Path and Clandestine creating an immense buzz and spawning dozens of other Swedish death acts to cash in on the sound, it was only a given that Earache would squeeze a little life out of the fans with a release like Stranger Aeons. To be fair, Entombed have a pretty good track record with EPs, a lot of those they released later in their career are packed with unique material and actually worth the money for fans, but this is possibly an exception. It's 3 tracks at just over 8 minutes, and like Crawl, it's also available on the Entombed compilation from 1997, so the value for that release is running pretty high.

"Stranger Aeons" itself, the title track, is lifted from the Clandestine album and reprinted here, so you could actually consider this somewhat of a 'single' for that song, although I can't imagine this was something that would actually chart or see radioplay from anything but a college metal show, in which case they were already playing the song from the album. It's a great song, of course, with Petrov returning to his rightful vocal throne and one of those huge Clandestine mosh rhythms at about 1:45 which, alongside "Raining Blood" and later "Slaughter of the Soul", would help shepherd a few hundred thousand fans of tough guy hardcore into the metal realm, for better or worse. To be fair though, it's a great riff, with a kind of meaty, post-Slayer appeal.

"Dusk" is a non-album track with a pretty crunchy polish to it, like something that barely escaped the demo stage, but the meaty mid-gain on the guitars is still hammering enough to appeal to fans, with a great lead and a few rhythms that feel as if they were bit straight from the Left Hand Path recording sessions. Not exactly essential, but at least consistent with the material of the band's youth. Speaking of the band's youth, the final track on this EP is "Shreds of Flesh", which appeared first on the band's But Life Goes On demo in 1989, and had been kicking around since the band was called Nihilist. The tune is sufficiently violent and explosive, and short, re-recorded here with the same tone as "Dusk", and for my buck, the best value on this recording.

Of course, "Dusk" and "Shreds of Flesh" are both reprinted on the 1997 Entombed compilation, so the aforementioned value is simply no longer present at the current time, unless you are hoarding every release from your favorite bands because you're extremely materialistic, crazy, or you strongly feel they will be worth a huge chunk of change at some point. Otherwise, this is not even something I'd purchase to stare at the cover art, and even at the time of released, it felt rather half-assed.