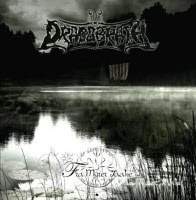 Dragobrath is the curious side project of Julian Mytsyk (Kroda), performed in a more straightforward black metal style than that other band, with nearly the same level of glorious mystique and atmosphere. Fra Myrer Taake... is quite good, and quite an improvement over the previous efforts Scripture of the Woods or And Mountains Openeth Eyes.... With a solid bass-heavy sound, pummeling riffs and some eerie experimentation in the writing, the album provides over 50 minutes of competence that you will want to revisit time and time again, even if the core of the sound isn't highly innovative.

After a frightful intro with dark ambiance and whispered ritual, "Inhaling the Distant Open Far" barrels forth with a steadily charging, morbid guitar riff that cycles through a subtle shift in the drums. The bass is coagulated blood, pumping forth a thicker ooze than many such bands are so inclined to use, but it helps center the guitars, which filter off into each ear like razors to wrists. "Nightwings" teases with an acoustic segment that rather sloppily morphs into a thundering, beautiful black rhythm, the gradations of the bass line adding an atmosphere of both warmth and tumult. Title track "Fra Myrer Taake..." is fucking creepy, sauntering along at a slow bass driven by the warped bass and scratching bloodied guitar streams, and "Blazes of Starlit Firmament" is an epic, 11+ minute track full of moody desperation and raging black Ukraine majesty. Of the remaining tracks, "Crimson Leaves Dance" and "Ravenclouds" are beautiful, and the finale "Walk the Path of Sorrow" is impressive enough, with the emotional rasping of its climax and the steady picked streams.

It's no surprise that Fra Myrer Taake... is a balanced album that explores both the dark nature of mysticism and the stark beauty of the wilderness, and such fans of pagan blackness would do well to plumb its depths. There's not a lot of complexity to the riffs, but then, none is really needed to drive its atmosphere into the listener's brain like a nailgun. The album shouts loudly from the wooded hills and is certainly a strong early release for 2010. An impressive two piece band, worth checking out whether you appreciate Julian's other band Kroda or not.