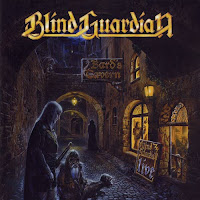 A decade past Tokyo Tales, it was time to release another Blind Guardian live effort, both to celebrate a very successful 10 years that included the release of all their best albums (Imaginations from the Other Side, Nightfall in Middle-Earth, Night at the Opera) and also pad the pockets for a job well done on their numerous tours. Live is given the full treatment, two discs and 22 tracks, at about 2 hours 14 minutes of total material. It was great to hear the newer stuff in particular, as I had been growing disenchanted by the band's excess studio edits and overdubs that had been evolving into their sound as early as Imaginations, but becoming almost unbearable for me on Night at the Opera (though I still love the actual songs). I had the chance to see the band perform at their Worcester Palladium gig around the year of this release, and can attest to how much better this later material sounds on the stage. For that reason alone, Live is worth spending the coin for.

Unlike Tokyo Tales, this is not the result of a few dates in a single city, but an accumulation of tracks from dates all over (Europe, for the most part). There are recordings from Aviles, Barcelona, Berlin, Bremen, Düsseldorf, Firenze, Granada, Hamburg, Lichtenfels, Madrid, Milano, Moscow, Munich, San Sebastian, Stockholm, Stuttgart, Tokyo, Valencia and Venice, a list which fully supports just how huge and international this band had become during the 21st century. The classic lineup is intact, with assistance from the Oliver and Alex Holzwarth rhythm section, and Michael Schüren on keys. Producer and sound engineer Charlie Bauerfiend (also responsible for some of their studio albums) is in charge of making it gleam, and to this extent the double live album is a raging success.

The biggest attraction for me here is to hear live takes of the more recent studio efforts, since much of the earlier material here is redundant to what had been recorded for Tokyo Tales. A Night at the Opera is represented with "The Soulforged", "Punishment Divine", and a great rendition of "Under the Ice". The Nightfall in Middle-Earth tracks comprise a solid chunk of the album; "War of Wrath" intro, "Into the Storm", "Nightfall", "Time Stands Still" and "Mirror Mirror" are all included. As for Imaginations to the Other Side, we get "The Script for My Requiem", "Mordred's Song", "Born in a Mourning Hall", "Bright Eyes", "Imaginations from the Other Side", and "The Script for My Requiem", all of which sound fucking intense. For earlier material, we have "Journey Through the Dark" and "The Bard's Song" from Somewhere Far Beyond; "Welcome to Dying", "Lord of the Rings" and "Lost in the Twilight Hall" from Tales from the Twilight World; "Valhalla" from Follow the Blind; and "Majesty" from Battalions of Fear. It's a great overall selection, spanning their entire body of studio work, and perhaps the only song that doesn't get me giddy is the "The Bard's Song", which to be fair, has never done much for me, though it does cause live crowds to break out their lighters and join together in...whatever.

In short, this is one of the better live offerings out there for a metal band, and assuming you aren't paying an arm and a leg for it, worth picking up. Most Blind Guardian fans are fanatics and already own this, but then, if you put a Blind Guardian logo and Andreas Marschall cover scan on a used tire or flyswatter, they'd also buy that. But with a great song selection and sound quality that rivals most of the band's actual studio efforts, Live is worth it even for the more conservative spender and listener.

Highlights: All the material from the three studio albums before this released.