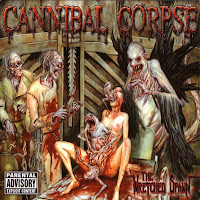 After the somewhat average debut of George Corpsegrinder in the vocal chair on Vile, Cannibal Corpse had been on a tear through the next 7-8 years, producing the excellent albums like Gallery of Suicide, Gore Obsessed and the mindblowing awesome that was Bloodthirst. The Wretched Spawn is their 9th full-length, and though it doesn't really live up to the previous three albums in terms of quality, one can forgive on grounds that it would be simply too much to string together another joyous maggotpile so soon. No, The Wretched Spawn is not the best of the last crop of Cannibal Corpse records, but it's speed and brutality are notable for carrying forward the tech style of the post-Barnes era and almost trying to one-up the prior albums in sheer speed and aggression.

Yes, The Wretched Spawn moves along at about 100mph as it bludgeons through the opening numbers "Severed Head Stoning" (one of the most forgettable pieces on the album) and then the mute fest gone squealing "Psychotic Precision", which at least offers a few flighty brain hammering rhythms before it erodes into an all too familiar groove which we feel like we've heard from the band a half dozen times before. "Decency Defied" is a solid tune with meatgrinder thrashing rhythms, but it never goes over the top where it needs to be; and "Frantic Disembowlment", while quite true to its energetic evisceration implicit to its title, likewise feels as if it were another exercise in frivolity. "The Wretched Spawn" has a certain lopsided groove to its churn and chugging, with a slower palm mute/squeal verse that gathers speed like a skull rolling down a heap of dead, but it never quite delivers. On the flipside, “Cyanide Assassin” is a rousing frenzy mostly remarkable for its loopy bridge tapping (and the excellent bass accompaniment).

“Festering in the Crypt” is coiled about a churning groove which creeps like decay across the skin of a corpse, stiffening and then dissoluting as the worms spew forth from its sockets. It doesn’t develop into anything interesting, but at least provides a nice shift in pace from the prior tracks. “Nothing Left to Mutilate” stands out slightly for its insanely hammered drumming, like an automated butcher block, and “Blunt Force Castration” offers us a mental image which is far from pleasant…though some of the acrobatic riffing here did graze my attention span. I did enjoy the rolling force that inaugurated “Rotted Body Landslide”, as once again Webster proves he is worth his weight in the fingernails of other death metal bassists…and that is a LOT of fingernails. “Slain” is good old Cannibal Corpse ala The Bleeding style rhythms, and ditto for the more chaotic “Bent Backwards and Broken”. Closer “They Deserve to Die” is another bludgeon which batters you over the head senselessly but really doesn’t conceive anything to make your beating the more memorable.

The Wretched Spawn certainly does not lack for effort, but I would consider the wealth of tracking here (13 in all) very much worth trading for 7-8 more interesting songs. As it stands, this is an album that falls under the descriptor ‘good’ without really granting the high replay value of a Gallery of Suicide or Bloodthirst. But the style is no shock, its prime Corpsegrinder era Corpse and at least a slight leg up on Vile. If you could care less for the nuance or subtlety of careful songwriting and just want another 45 minute sheer wall of death, with technicality and riffs galore (though few with any lasting hooks), then The Wretched Spawn still remains superior to many of the band’s impersonators, but I’d favor any of their other 21st century albums to this.